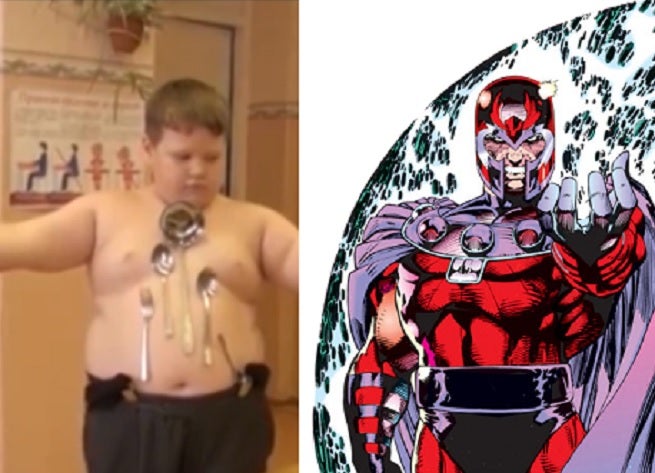 He wasn't born with his abilities -- and unless it's been wildly underreported, has never used them to lift a baseball stadium or attack the Golden Gate Bridge. Nevertheless, there's a twelve-year-old Russian boy who is able to attract metal to his body, having been magnetized by an accident.

After being electrocuted when leaning against a lamppost, the boy went to sleep and woke up suddenly somewhat more super.

"When I came round, I felt groggy, but managed to get home and told my mum what had happened. When I woke up the next day and got out of bed, I found some coins that had been lying on the mattress had stuck to my body. Then when I was having breakfast and dropped my spoon, it stuck to my chest," Nikolai Kryaglyachenko told the New York Post.

You can check out some footage below.

This apparently happens fairly frequently in Russia; the story reports that a Russian family was "magnetized" following the meltdown at the Chernobyl nuclear plant more than 25 years ago.