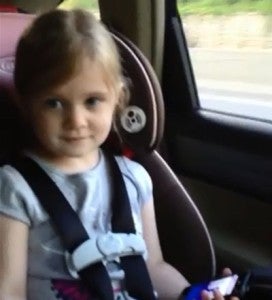 Marvel Comics fans don't want to miss the Tuesday, October 1, 2013 episode of Jimmy Kimmel Live. In addition to a guest appearance by Agent Of S.H.I.E.L.D. star Clark Gregg, there will also be an appearance by a four year old comic book expert named Mia Grace.

Mia Grace became a YouTube sensation, when her dad posted a link on Reddit to a video on YouTube where she answered trivia questions about Marvel Comics superheroes. And the questions aren't just easy softball questions either, as the four year old identifies that Captain America's shield is made out of Vibranium and lists some of the stones in the Infinity Gauntlet.

The Reddit post attracted over 1,700 vote ups and over 300 comments, which led to the YouTube video going viral. The YouTube video, which we've embedded below, has generated over 550,000 views since it was posted in May.