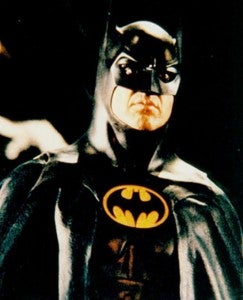 With Warner Bros. announcement that Ben Affleck will be playing Batman, everyone has been wondering what the previous Batmans think. Batman Forever's Val Kilmer tweeted to give Ben a chance, while sixties TV show Batman Adam West joked that Affleck should buy deodorant (because it gets hot in the Batsuit).

Now, thanks to a TMZ reporter, we also know what Michael Keaton thinks. Keaton played Batman in Tim Burton's Batman and Batman Returns. As Keaton attempted to make it to his car, the TMZ reporter asked what Keaton thought of Ben Affleck's casting as Batman. Keaton said, "I just heard that. Someone just told me that. He's going to be great."

When pressed over the flack that Ben Affleck has been receiving, Keaton quipped, "Nah...no, not flack, he's been getting Aflac." Then, Keaton reiterated, "No, he's going to be good. He's going to be great."

Michael Keaton Says Ben Affleck Will Be Great As Batman