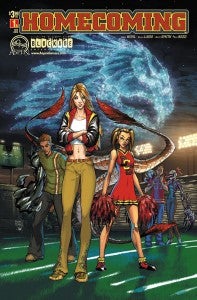 Aspen Comics have made a four-page preview available of the first issue of their forthcoming series, Homecoming. Based on a concept by writer David Wohl along with incoming Superman scribe Scott Lobdell and the late, great Michael Turner, the first issue of Homecoming features two different covers: one by Mike Debalfo and one by Turner himself. Check out the preview and soliciation text below. Homecoming #1 is in stores on August 15. A twist on the teenage superhero, Homecoming features an amnesiac appearing in a small town and, with the help of a high school student, trying to piece together what happened to her between when she disappeared ten years ago and when she reappeard in the same place a decade later and with powers. [gallery link="file" order="DESC"]

HOMECOMING #1 David Wohl Writer / Emilio Lasio Pencils / Brett Smith Nobody ever said being a teenager was easy... Just when you thought it was safe to go back to High School...Aspen Comics proudly presents an all-new series created by Michael Turner, Scott Lobdell and David Wohl. HOMECOMING! Hunter Wilson is just an average American teenager in an average American town, but when the beautiful and amnesiac Celeste arrives in his backyard, Hunter's life will change forever. He discovers that Celeste had disappeared from that very house 10 years earlier, and now she's back with little memory of who she was--but with strange, fantastic abilities and the knowledge that dark forces are rapidly approaching! Now, Hunter must help Celeste regain her memory while he tries to keep himself and his friends safe--and if that wasn't difficult enough, Homecoming is just a week away and he doesn't have a date to the dance yet! HOMECOMING #1 is in stores August 15th, 2012!