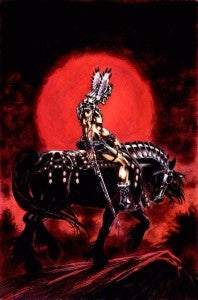 Earlier this week, ComicBook.com reported that iconic Green Arrow artist Mike Grell, creator of DC Comics's long-running sword-and-sorcery comic The Warlord, had been admitted to the hospital with what later turned out to be a case of cellulitis.

Earlier tonight, Grell's wife took to Facebook, saying, "To all Mike Grell's Family, Friends, and Fans. Mike is home safely with me tonight and wishes to thank you all for all your wishes and prayers!"

Grell, who remains active in comics and has worked on The CW's Arrow, was admitted to the hospital with vision problems and flu-like symptoms on August 1.

"By August 3rd, my vision had returned to 100% normal, my general condition was improving and my doctors expected me to be discharged shortly," Grell wrote. "Then the wheels fell off. It seems cellulitis is a nasty bug that, even when you kill it off with antibiotics, the dying cells produce toxins that destroy other tissue."

Last weekend, he had to cancel a convention appearance, leading to word spreading online earlier this week that he was sick before he issued a statement telling fans not to worry, and that he would be back home soon.

Mike Grell Released From the Hospital