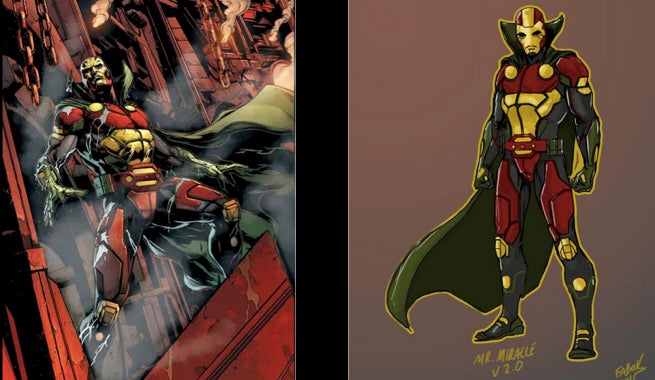 One of DC Comics' New Gods is getting a miraculous make-over this summer.

And if you're a fan of wordplay and Jack Kirby, you'll know that it's Mister Miracle, a.k.a Scott Free. Mister Miracle will sport an updated costume in the upcoming pages of Justice League, debuting just in time for the title's Darkseid War event. Designed by series illustrator Jason Fabok, Scott Free's new costume is a slick update on the classic rendition. As Fabok himself put it, his Miracle is "Kirby With a modern twist." Sounds good to us.

You can check out the New God's new duds in Fabok's announcement below.

The updated Mister Miracle will join his fellow New Gods for "The Darkseid War," an epic story that puts Jack Kirby's Fourth World creations on a collision course with the Anti-Monitor. The story's first chapter hits in June's Justice League #41.

What do you think of Mister Miracle's new costume? Let us know in the comments.

Mister Miracle Gets A New Look