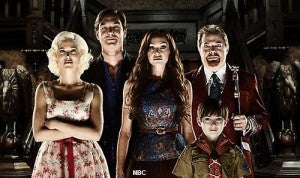 While it was pretty clear already, the production staff at Mockingbird Lane hadn't officially been told that there was no chance the highly-rated special, originally conceived as the pilot for a television series, wouldn't be coming back for more episodes. NBC rectified that yesterday. From showrunner Bryan Fuller's Twitter feed: "I tweet with a heavy heart. NBC not moving forward with #MockingbirdLane. From producers and cast, thank you all for enthusiasm and support." The series was a re-working of the classic sitcom The Munsters, but coming from the showrunner behind Pushing Daisies, it was perhaps expectedly understated, playing to the surreal aspects of the premise more than the broad humor that drove much of the original series. Fuller will make out alright; he's currently working on Hannibal, one of two shows going forward in the fall based on Thomas Harris's characters from The Silence of the Lambs.