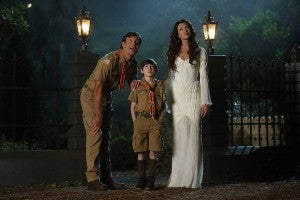 Before Bryan Fuller's Mockingbird Lane, a darkly comic re-envisioning of The Munsters, ever aired last night, NBC had already decided to pass on the pilot; it will not be a TV series, and in all likelihood the pilot will be all that fans ever see of it. As of this morning, in fact, no legal copy of the pilot was available to buy streaming on Amazon or iTunes, which begs the question: Will Fuller's pilot ever get an official release now that it's aired? In any event, the episode scored more than 5 million viewers, beating out new episodes of CSI: New York, Fringe and Kitchen Nightmares. It also bumped this week's episode of Grimm up 25% over last week's ratings. So what's next? That seems to be the question for a lot of entertainment writers, who feel that after all the money NBC spent on the pilot, perhaps Fuller's show can do better than to just air once to offset the damage. Still, a high-profile reboot of a famed franchise like The Munsters probably needed more buzz than this series had behind it to ever really stand a chance. That the pilot aired Halloween week may have bumped Mockingbird Lane's ratings up a bit, something that would be difficult to reproduce on a weekly basis. As hard as it is to ignore the way the show overperformed, then, it's equally difficult to justify actually throwing any more money at a series that might last six episodes and then be cancelled all over again. That also assumes that, having been given his walking papers, Fuller could be pulled off of Hannibal, his new Hannibal Lecter show starring Mads Mikkelsen and Hugh Dancy.