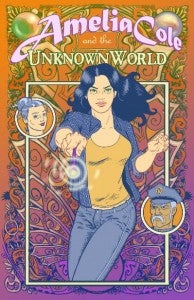 This July 4, writer Chris Roberson will declare his independence from corporate-owned comics.

ComiXology has announced a new agreement with Roberson and his wife Allison Baker's MonkeyBrain Comics that will see the popular digital site roll out at least five initial titles for the publisher beginning on July 4. The titles, which include Aesop’s Ark by J. Torres and Jennifer L. Meyer, Amelia Cole and the Unknown World by Adam P. Knave, DJ Kirkbride and Nick Brokenshire, Bandette by Paul Tobin and Colleen Coover, Edison Rex by Chris Roberson and Dennis Culver, October Girl by Matthew Dow Smith and Wander by Kevin Church and Grace Allison, will be teased at San Diego's Comic-Con International later in the month, where more books from MonkeyBrain will also be announced.

The company is an imprint of MonkeyBrain books, which Roberson and Baker founded a decade ago. Through that publisher, they've worked with the likes of Michael Moorcock, Paul Jenkins, Joe R. Lansdale and Alan Moore.

“MonkeyBrain Comics was born out of a desire to directly explore what opportunities there were in the newly expanding digital marketplace for creator owned material,” said Chris Roberson, co-publisher of Monkeybrain Comics. “We knew from the get go that we’d want to work exclusively with comiXology, who have become the undisputed leader in the digital comics field with their platforms’ unparalleled reading and shopping experience. And we’re pleased to have so many of our close creator friends along for the ride. I can’t wait to see what fans around the world think about our first batch of releases!”

What, if anything, this means for Roberson's relationship with IDW, where he's been working quite a bit and where his creaotr-owned Memorial has a home, was not immediately clear. That will likely remain Roberson's home for print comics, though, as it appears that MonkeyBrain is, at least at first, an all-digital enterprise. Their press release says they're exploring their options for print collections, but that means they won't have to make a decision or an announcement until it comes time to start collecting the material, likely months down the road.

“We’re excited to be the exclusive digital home of MonkeyBrain Comics,” says co-founder and CEO David Steinberger. “ComiXology’s mission is to get comics into the hands of people everywhere and we look forward to doing just that with Chris an Allison’s stellar line of creator owned comics!”

Roberson famously fell out with DC Comics over the publisher's decision to produce this summer's Before Watchmen miniseries. When his creator-owned iZombie was cancelled at Vertigo, he announced via Twitter that he would not work for the publisher again following a final arc for which he was contracted (writing Fairest, a tie-in to Bill Willingham's Fables). Following a twitter conversation in which he openly criticized the company's ethics, DC released him from the Fairest contract.

You can read a summary of each of the titles below, compliments of MonkeyBrain Comics' ComiXology page:

Aesop's Ark: Animals on the Ark exchanging anecdotes. Sharing stories to weather the storm. Fables will keep them afloat during the flood. Listen. And learn.

Amelia Cole and the Unknown World: Amelia Cole lives in two worlds -- literally. One runs on magic, the other built on technology. When the barriers between those worlds start to break down, Amelia and her aunt Dani must take extreme action. It's the start of whole new world in adventure, magic, and excitement as Amelia Cole steps forward to do what she knows it right, even when the consequences might be wrong. Written by Eisner and Harvey award winners Adam P. Knave & D.J. Kirkbride, drawn by Nick Brokenshire, and lettered by Rachel Deering.

Bandette: The adventures of Bandette, a young costumed "artful dodger", leader of a group of urchins dedicated to serving justice, except when thieving proves to be a bit more fun. The story of Bandette treads a thin line between Tintin and Nancy Drew, with a few costumes thrown in. Bandette and her crew at turns join forces and cross swords with the mysterious master thief known only as Monsieur, and one B.D. Belgique, perhaps the most harassed police inspector of all time.

Edison Rex: Edison Rex is the smartest man in the world, a criminal genius, and the archnemesis of the world's greatest protector, Valiant. Having dedicated his life to defeating Valiant and proving once and for all that he is a menace to humanity and not a hero, what will Edison do once he finally succeeds? And with Valiant out of the way, who will be left to protect the Earth?

The October Girl: Autumn Ackerman has always known she was a little different, but she has no idea just how different she really is. 18 years old and with no hope for a future beyond working behind the counter at her small town's coffee shop, Autumn is about to discover that everything she thinks she knows about the world is wrong. The first chapter of a brand new dark fantasy story for teens and adults by critically acclaimed artist and writer Matthew Dow Smith (Doctor Who, Witchblade).