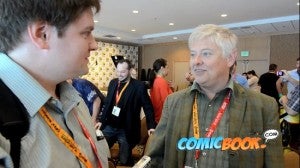 Other than Cheers stalwart John Ratzenberger, there aren't a lot of actors who have starred in more than one Pixar franchise, but whose voice is immediately recognizable. One such actor is Dave Foley, the comic genius most recognizable for his work with The Kids in the Hall and on the sitcom NewsRadio has had a long career in sketch comedy, sitcoms and stand-up, but in recent years has also taken to voice acting, with roles in Pixar's A Bug's Life and Dan Vs., a series airing on The Hub and starring Paget Brewster and Curtis Armstrong.

Looking forward to his role in next year's Pixar tentpole Monsters University (the sequel to Monsters, Inc., starring Billy Crystal and John Goodman), ComicBook.com spoke briefly with Foley about the odd experience of doing voice work essentially as himself. Starring alongside Tom Kenny, the Spongebob Squarepants and Green Lantern: The Animated Series actor who has more range than most living voice actors, we asked Foley if it was a bit odd to be so instantly recognizable, no matter what his character might look like.

Check out the red carpet-style interview below (the video is embedded) and check back Sunday for more Comic-Con video and a more in-depth look at Dan Vs.

You've got a very distinctive voice.

That's true, there's not much I can do about it.

So it has to be a whole different preparation process, right, than someone like Tom, because it's much more like live acting--you're Dave Foley and you've got just inhabit a character.

Yeah, I'm pretty much hired to sound like me and it's just a matter of getting the attitude of the character right. I definitely have no way...I can't alter this. This is what comes out of my mouth whenever I talk, even when I play women!

Yes, definitely. So they're not bringing me in, expecting me to create some crazy-voiced characterization.