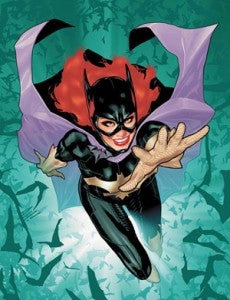 Well kids, as the first full week of the DC relaunch continues, I continue to wade through the four-color fun of it all, and so far it's been an adventure! These next two reviews focus on the first two entries into the Batman universe, with one familiar face accompanied by a brand new one. This week sees the release of the much-anticipated Batgirl #1 and the newest addition to the family with Batwing #1. Barbara Gordon's return to wearing the cape and cowl has been one of the more hyped releases in this relaunch, and fans are divided on the issue of if Gordon should be returning to her previous role as Batgirl or if she was more effective as Oracle, her post-The Killing Joke identity. If anyone is up for the task, it's writer Gail Simone, who has handled the character for the past several years. Batwing is an unknown commodity, and it certainly brings some diversity to not only the Batman world but the DCU as a whole as well. Let's take a look first at Barbara Gordon and her return to action! Batgirl #1: I have to say that I really, really tried to be fair and honest in my review of this book. Batgirl/Barbara Gordon has been one of my favorite characters in all of comics, and for long as I can remember it's always been that way. I tried to put on my reviewer hat and close off the ardent fanboy in me who was dying to see Barbara back in action as the classic and most popular Batgirl. So, here goes: my neutral, strictly objective review! To start, artist Ardian Syaf's Batgirl is beautifully drawn, bringing Barbara to life in an era and a way that readers haven't seen before. The splash page where Barbara says, "Tonight, I'm Batgirl" is not only visually arresting, but the expression on her face captures a lot of feeling as to how she feels about her return to the role. The issue touches on the events of The Killing Joke, showing that in fact her shooting at the hands of the Joker did happen, but the effects lasted only a few years. As the action cuts between Batgirl's current battling with some minor crooks and her past, we get an effective sense of how Barbara got back to this point. Barbara's attempts to restore her life to normal involve moving into her own place with a stereotypically quirky new roomate, all the while a mysterious new villain named Mirror takes the scene, hunting down people who have survived situations in which they should not have survived, and Barbara is interestingly on the list as well. A wounded man in the hospital, surrounded by his cop friends, is ambushed by Mirror and Batgirl hits the scene. The issue hits a bit of a odd note in this part, as suddenly Barbara is frozen by the aiming of Mirror's gun, which results in the injured man in greater peril than before. It's the one odd and off note in this otherwise solid, well-crafted opening issue. Grade: A-/B+ 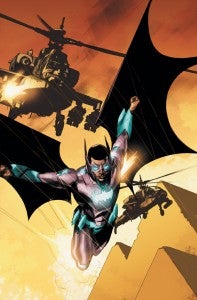 Batwing #1: Ambition is certainly one of the watchwords for this new series, which seeks to expand the Batman mythos and persona to Africa, the Congo specifically in this case. Policeman David Zavimbe becomes Batwing in the hopes of bringing order and peace to one of the most crime-ravaged cities in Africa, all under the tutelage of the one and only Batman, Bruce Wayne. The story opens with Batwing engaged in a brutal battle with Massacre, a villain bent on murder and destruction. The tale then flashes back to show how we got to this point, and just what state the city of Tinasha is in as Zavimbe navigates it. An encounter with a drug dealer, along with back up from Batman, bring the reader to the scene of a terrible mass-murder. It's here that more of Batwing's character gets revealed, as he attempts to keep his identity a secret while leading his fellow officers to investigate the scenes that he legally cannot in his other persona. Writer Judd Winick, now well familiar with the various aspects of the Batman universe, does an apt and skilled job at developing this inaugural story, and Ben Oliver's drawings are appropriately dark and heavy in tone and image to match the violence seen thus far. Despite all that, most of the issue comes across feeling like we've simply taken Batman out of Gotham and put him in Africa. Even though Batwing is learning the ropes from Batman, it still feels a bit derivative. Batwing has his own sense of justice and right and wrong that causes him to strive to do more to stop crime. He also has a crime-filled city, much like Gotham, with corrupt cops and insiders working against their own ends. There's even an "Alfred" character in this issue, with Batwing getting an assist from Matu Ba, a child soldier rescuer. The series has some potential, and Massacre has true frightening features as a villain, but it may take some time to get out from under the shadow of its source material if the patterns and similar motifs are not stepped away from. Grade: B-