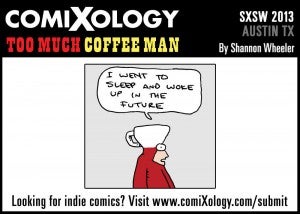 Too Much Coffee Man creator Shannon Wheeler's style tends to lend itself nicely to the kind of short-form storytelling that's very difficult to place in today's comics market.

Slightly longer than strips but too short to really be anything but an entry in an anthology, as often as not he ends up sitting on a ton of content before finally publishing it all in his own compilations--not so anymore, though, as he's discovered Dark Horse Presents.

Wheeler recently joined ComicBook.com for an exclusive chat about his work at Dark Horse, teasing these projects and sharing some details about how the Villain House story will unfold and become more interconnected and elaborate over time.

ComicBook.com: What have you got percolating right now at Dark Horse? It seems like a lot...! 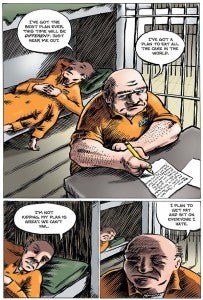 Shannon Wheeler: A few things, actually. We've got a few things. I'm not sure how much we're supposed to reveal or whatever but I don't care.

The Villain House stuff I really wanted to turn into a series and so then I'm working on a lot. We're going to collect up the four stories I did for Dark Horse, put that in a comic book.

We're going to do the Drunk Family from Grandpa Won't Wake Up. We're going to do possible Drunk Family Goes Swimming or possibly Drunk Family's Christmas. Maybe Jazz is Not Music--I don't know, something, so that's in the works. Mike [Richardson]'s bugged me to do more Too Much Coffee Man, which I'm totally stoked to do and Dark Horse Presents is a perfect spot for that.

ComicBook.com: It is! Every time you're forced into a real series format and you have to try and impose order on the story, it feels a little weird. Continuity doesn't really suit him.

Wheeler: No. I've never believed in continuity--I've always liked the Fabulous Furry Freak Brothers and that's sort of what I modeled Too Much Coffee Man after was that sense of storytelling. Yeah, I like doing longer stories but the short ones--I like in quick, out quick.

ComicBook.com: And you have the ultimate in quickies, because you do the New Yorker cartoons, too, right?

Wheeler: Yeah, and actually one's in this week's issue, which is kind of cool. So yeah, I've got a lot of stuff. Just banging away.

ComicBook.com: What's the elevator pitch for Villain House? I remember being excited for it when the announcement hit.

Wheeler: The elevator pitch is that it's basically a series of short stories about villains. What I want to do is have them slowly overlap more and more so that an ex-girlfriend in one turns up being a girlfriend in another. For example, one of the women dates supervillains and she's slowly collected up all these supervillain items. And we have her as just a kind of ancillary character but I was talking to a buddy of mine who had the same idea.

Suddenly she's a supervillain because of all the guys she's dated. I said, "Actually, that's perfect--you can tell that story, but just wait four issues." So that we've established that character in previous issues where she's in doing something else. She's ancillary in the first story but slowly more and more we're going to web it all together into just a world of villains.

ComicBook.com: And then DC stole your idea for their villains month!

Wheeler: Oh, well. What are you going to do?

No, but I have this great slogan for the book--it's "With great ignorance comes great confidence." All the villains have just this exuberance and confidence at constant failure and tragedy. It's taking a lot of inspiration from the Marvel Comics from the '60s and '70s. I just loved those books and I loved the ones that focused on The Sandman or some other secondary villains that I loved a lot.

ComicBook.com: At the end of the day, it's hard to find humor in Doctor Doom.

Wheeler: Right! One of his henchmen, though, would be great. I could do a whole issue about one of the henchmen, his family life, and she's like, "I really want you to get up in Doctor Doom's face and get that promotion," and he's like, "No, no--every time you get promoted, you get killed." And I can see them bickering about it. Low profile, that's the ticket.

More Too Much Coffee Man, Follow-Up to Grandpa Won't Wake Up Coming From Shannon Wheeler