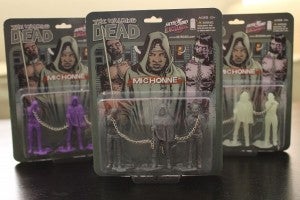 Skybound Entertainment announced yet more The Walking Dead New York Comic-Con-exclusive merchandise earlier today, adding a trio of action figures and a t-shirt to the already-rich bounty of zombie-themed merch shambling toward the convention hall day after tomorrow. 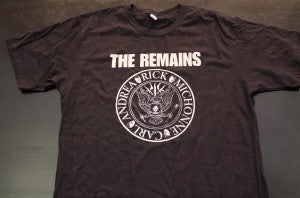 A t-shirt is available, too--a parody of the iconic logo of the band The Ramones, this t-shirt reads "The Remains" and that pretty much says it all--listing the names of the four characters still left standing from the early days of the comic, this t-shirt is one of those things that fans of the TV show will likely look at, scrutinize, try to figure out, and then regret once they do.