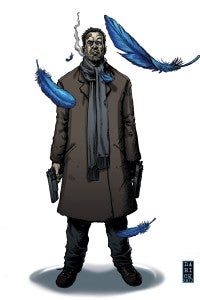 In a new press release, Image Comics have made details available for September's upcoming release Happy!, the new series by Grant Morrison and Darick Robertson. "HAPPY! is a story I've wanted to write since hit-man Nick Sax and his 'partner' Happy the Horse appeared fully-formed in my head two years ago," said Morrison. In an interview at Newsarama, he elaborated that "I wanted to do a classic Christmas story – like A Christmas Carol or It's A Wonderful Life – but with all the junkies, killers and pedophiles which make our modern world so colorful!" A dark world full of junkies, killers and pedophiles, plus a twisted Christmas story? Doesn't sound entirely unlike what Darick Robertson has done before in Transmetropolitan, right? And it comes with a hero who brings chemical dependancy problems to the table, as well. From Image Comics:

Nick Sax isn't what you'd call a "winner." The anti-hero of the new Grant Morrison and Darick Robertson comic mini-series HAPPY! has been fired from the police force, turned on by his own employees in his murder-for-hire business (well, what would you expect?), is constantly drunk, and is waging a hopeless battle against the agonies of eczema. Sax seems beyond redemption, but saviors often take strange forms, and, in his case, it's the form of a tiny blue, feathered pony named Happy.

Announced back in February at the Image Comics Expo, HAPPY! is the first title from either of the star creators to be published by Image Comics, following a year where not only did The Walking Dead #100 shatter sales expectations but titles like Fatale, Thief of Thieves and now Revival have enjoyed sellouts and terrific critical success. "As much as I enjoy making monthly superhero books, there's something very exciting and inspiring about creating a complete, original story from whole cloth and I'm grateful to Image Comics for seeing the potential of this project and giving it a home," said Morrison. "After a banner year for creativity at the company, Darick and I hope we can round 2012 out on a high note with the most twisted Christmas crime story you'll ever read."