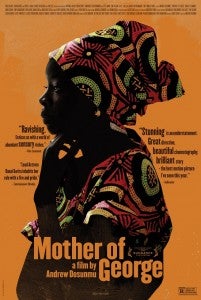 Danail Gurira, star of AMC's The Walking Dead, will appear in Mother of George, an upcoming film written by Darci Picoult and directed by Andrew Dosunmu. The poster and trailer have just made their debut.

Mother of George is the second feature by Andrew Dosunmu, starring Danai Gurira. Featuring stunning work by acclaimed cinematographer Bradford Young, the film premiered to critical acclaim at the 2013 Sundance Film Festival, and will make it's New York premiere at the BAM Cinemafest before opening theatrically in mid-September.

After the joyous wedding between Adenike (Gurira) and Ayodele, a Nigerian couple living in Brooklyn, marital complications arise out of their inability to conceive a child. The problem devastates their family and defies cultural expectations, leading Adenike to make a shocking decision that could either save her family or destroy it. Dosunmu captures the nuances of this unique and fascinating culture by creating a beautiful, vibrant, and moving portrait of a couple whose joys and struggles are at once intimate and universal. The film also stars Yaya Decosta Alafia and Tony Okungbowa.

The film opens in New York on September 13 and a week later in Los Angeles.