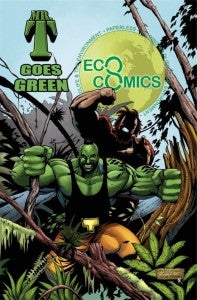 Remember Mr. T from the Rocky films and the A-Team TV show? People often remember Mr. T for his Mohawk haircut and his gold jewelry. In present day, Mr. T is also a comic book star. Mr. T has appeared in a graphic novel from publisher Mohawk Media, and now that graphic novel is being released as a series through environmentally-friendly, paperless Eco Comics. Editor Stuart Buckley said, "It was always our intention to release the Mr. T graphic novel as a comic book series. Each chapter was intentionally structured to be the same length as a comic book. However, we've had to adjust to market demands. The graphic novel has sold out. The digital titles of Eco Comics have no print run, and so will never sell out, meaning every T fan can order a copy. The added satisfaction is that the environment hasn't suffered as a result of paper production." The Mr. T series was written by Chris Bunting with art by JL Czerniawski. Bunting said, "I've gone to great lengths to do things never attempted, such as making T as close to a super hero as possible while retaining his classic persona. After over twenty-five years of fame, this action icon finally gets a rogues' gallery, and even a new catchphrase. Old and new T fans can expect plenty of other surprises too." The Mr. T series also contains feedback from Mr. T himself. According to Mohawk Media, Mr. T details why he is an even tougher comic book hero that Wolverine. The cover for the series sort of makes Mr. T look a bit like either the Hulk or the Savage Dragon.