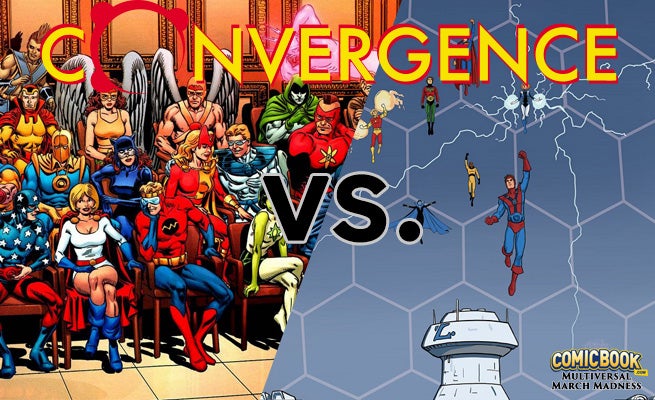 Multiversal March Madness' opening rounds continue! Though DC and Marvel Comics are breaking the piggy bank on their endless realities with events Convergence and Secret Wars later this spring, the bracket fever from the NCAA March Madness has our minds stuck on the tournament style crossover event.

Pre-Crisis Earth 2  Vs. Superboy and the Legion of Super-Heroes

The World:  Before Crisis on Infinite Earths, times were simpler in the DC Universe. On the world of Earth 2, heroes were larger than life and actually aged, with the reader, in real time. With idyllic versions of the Justice Society that included Superman, Batman, Wonder Woman, and more, plus the next generation of heroes with Infinity, Inc.'s Power Girl, Huntress, Jade, Obsidian, and more, their tireless devotion to justice makes them a force to be reckoned with.

Biggest Strength: Pitted against the Legion of Super-Heroes, Earth-2 has one major advantage: Experience. You're looking at three generations of heroes available for the fight, each one trained by the one before it. Earth also has a nice mix of hardened, battle-seasoned warriors and  fresh hopefulness. And they never, ever give up.

Biggest Weakness: Even with three generations at their disposal, Earth 2 still might not have the same numbers that the Legion does. Also, age can work against anyone.

The World: Three teenaged heroes, inspired by the heroics of Superman, go back in time to meet the young incarnation of their inspiration, Superboy, and recruit him into their fold. Their ranks included Lightning Boy, Saturn Girl, Cosmic Boy, and characters with basically every power set you can imagine.

Biggest Strength: The Legion has history on their side. They can study tactics and battle plans from literally every fight the JSA and Infinity, Inc. ever had. Over 30 members, including the incredibly powerful Superboy, Supergirl, and Mon-El, they have heroes ready for any opponent and any situation. Oh, and thanks to their Legion rings, they all posses flight and increased durability – that's makes one serious opponent for anyone.

Biggest Weakness: The heroes of Earth 2 that this Legion faces were inspirations for a reason. Three generations of heroes makes Earth Two more than a team. It makes them a family. No super hero can build that coordination through a club.

Who will win: The heroes of yesterday, or tomorrow? Decide in the poll below!

Multiversal March Madness: DC's Earth 2 Vs. The Legion Of Superheroes