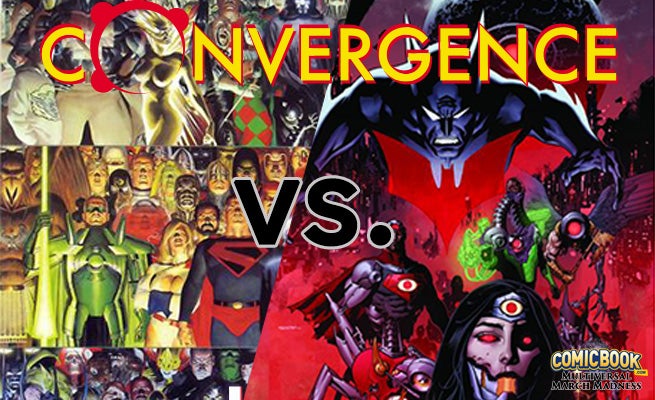 Welcome to the opening rounds of ComicBook.Com's Multiversal March Madness. Though DC and Marvel Comics are breaking the piggy on their endless realities with events Convergence and Secret Wars later this spring, the bracket fever from the NCAA March Madness has our minds stuck on the tournament style crossover event.

Like we explained in our opening post, we're leaving to you to choose the winners in our own cross-company tournament. We're in throwing in a nifty secret prize for the players with a winning bracket. But enough chit-chat. It's time to get in the super-powered paint with the first round's combatants.

Stats: One of the most acclaimed series of the last twenty years, Mark Waid and Alex Ross' Kingdom Come features a near-future version of the DC Universe where Superman's retirement and the rise of '90s-style antiheroes has left the world a violent shambles. When a nuclear crisis draws Superman out of retirement, is the world ready for his return and old-school heroics?

Strengths: Pragmatically speaking, Kingdom Come is much more popular, and having more experienced versions of the heroes along with one of the most powerful post-Crisis iterations of Superman. That combo makes them hard to beat.

Weaknesses: While metahumans present the largest threat to the world in Kingdom Come, in Futures End they've already been all but obliterated by Brother Eye. So...yeah.

Stats: We're not sure just how this world turns out yet, but 35 years in the future, there's a version of the DC Universe where Brother Eye has taken over and turned the world's superheroes into cyborg abominations. Batman Beyond, one of the final survivors, traveled back in time to stop this future from happening.

Strengths: Well, in the world of Futures End, Brother Eye has consumed nearly everyone on the planet, leaving little resistance. There's rarely been a single force so capable in DC.

Weaknesses: Aside from the fact that Kingdom Come is so wildly popular that characters and concepts from the book bleed out of the main miniseries and into the DC Universe proper? Futures End doesn't have a working Superman or Batman. That makes them pretty vulnerable in multiversal combat.

Which universe will rise victorious? Cast your vote in the poll below. Polling ends on March 24 at 5:00 p.m. EST.

Attack on Titan Promo Teases Major Reveals in Next Episode

Pokemon Legends: Arceus Has a First Person Mode....Sort Of