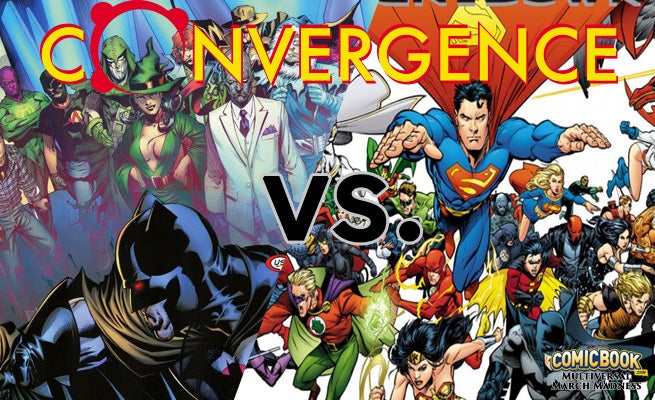 Stats: After the Crisis on Infinite Earths, a streamlined version of DC's multiverse existed, clumping its parallel dimensions into a single world with a merged history. Generally, it was DC's canonical universe until 2011's Flashpoint crisis, when time and space were rewritten.

Strengths: A group of heroes with great rapport, a lot of experience and years of history. Generally, a well-oiled machine.

Weaknesses: DC's traditional heroes may be shocked to see such twisted versions of themselves on the field of combat. If taken too far aback by the encounter, the team's game could veer too far off, making them far softer targets.

Stats: When Barry Allen went back in time to prevent his mother's murder, he inadvertanately created a universe where Superman doesn't exist, Bruce Wayne died instead of his parents, the world's heroes are led by a heavily politicized  Cyborg, and Wonder Woman and Aquaman range the planet with war. Oh, and the US government harnesses the power of Doomsday.

Strengths: Flashpoint is significantly different than most worlds in the DC multiverse. Such wildcards are unpredictable, and could do anything to win the day. Plus, the grizzled heroes of the Flashpoint universe are used to brutality in combat.

Weaknesses: These heroes lack the rapport, experience, and history that the Pre-Crisis DC Universe boasts. It's hard to call for back-up when it's ever man for himself.

Which side of the Flashpoint Paradox will advance to round two? Decide in the poll below!