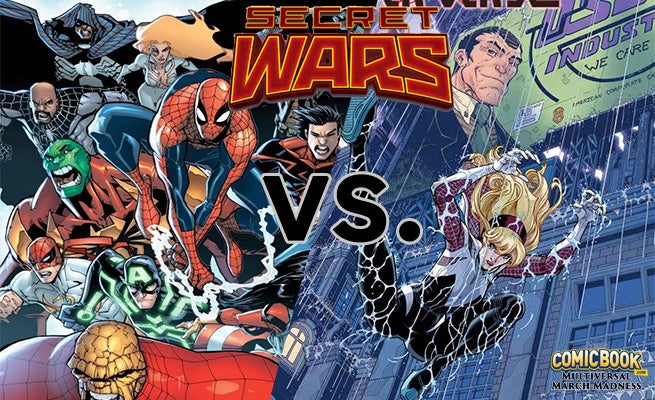 The opening rounds of ComicBook.Com's Multiversal March Madness continue! Though DC and Marvel Comics are breaking the piggy bank on their endless realities with events Convergence and Secret Wars later this spring, the bracket fever from the NCAA March Madness has our minds stuck on the tournament style crossover event.

Like we explained in our opening post, we're leaving to you to choose the winners in our own cross-company tournament. We're in throwing in a nifty secret prize for the players with a winning bracket. But enough chit-chat. It's time to get in the super-powered paint with the first round's combatants.

Stats: Arachnia--or as Spider-Man editor Nick Lowe decrees it, "SPIDER-VEEEERSE,"--contains virtually every parallel Spider-Man, Girl, Woman, and yes--even swine--within the House of Ideas. Many possess extra abilities beyond the prerequisite spider-powers, and have worked together to defeat overwhelming forces.

Biggest Strength: The Peter Parkers and their like-minded allies know this: With Great Power comes Great Responsibility. And lets face it: They have some great power. Their familiarity, fighting ability, and style variety makes just a small group of spiders very formidable, let alone hundreds.

Biggest Weakness: Most of the Spiders lack a killer instinct, and that could be a big problem when fighting this particular, feral opponent.

Stats: Spider-Island was not Spider-Man's best day – the entire of the island of Manhattan was transformed into monstrous man-spiders. The dominating virus quickly infected all of Manhattan's inhabitants, including several Avengers.

Biggest Strength: It's literally millions of Man-Spiders, all ready to either infect or kill anyone they can find. Think about a video of a bunch of baby spiders swarming. Now think of them human-sized. Terrified yet?

Biggest Weakness: What the man-spiders posses in ferocity and strength, they lack in the brains department. The lack of coordination leaves them ripe for exploitation from the countless Peter Parker (one of the Marvel Universe's smartest minds) variants.

Which Spider-World will spin its final web? Decide in the polls below! Polling ends on March 24 at 9:00 p.m. EST.