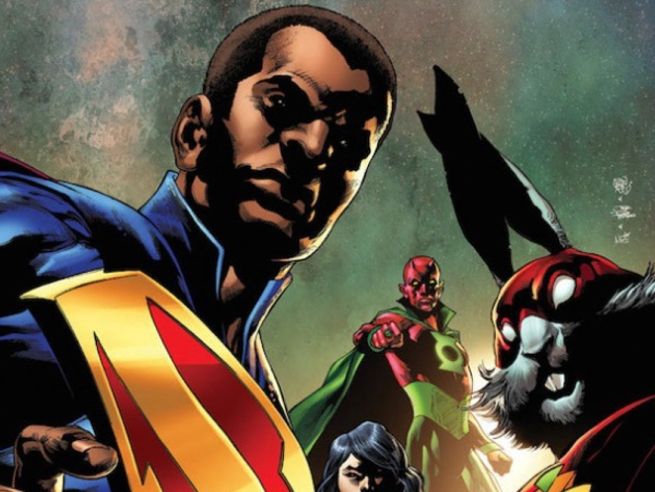 Do you consider yourself to be a Grant Morrison fan? Did you enjoy Seven Soldiers of Victory or The Invisibles?

If so, you're going to enjoy Multiversity #1. Go read it now. Nothing to see here.

If you're unfamiliar with Morrison's work, then it's important to go into this comic knowing that it's not going to be like anything you've read before. It will be referred to as strange, bizarre, odd; all of which are ways to say that it's completely unique. That will be a good thing for some and a not-so-good thing for others. If nothing else, it means that you'll have an experience worth discussing.

And what an experience it is.

Multiversity #1 is packed with fantastic visuals, meta-textual commentary, and a surprising amount of fun. Ivan Reis along with inker Joe Prado and colorist Nei Ruffino are responsible for the aforementioned visuals. Reis is one of the artists that DC Comics has modeled its current house style after, but for good reason. He manages to combine clear storytelling with images of cartoons that convey the subjects as being somewhat realistic. This allows him to present some very unique ideas and lots of new characters in a manner that readers will easily digest. His cosmic vistas and characters all take on life and provide plenty to ogle on each page.

Although Reis' style is being imitated in a lot of current superhero comics, he does what he does better than anyone else. His contribution is an excellent choice for a series that plans to explore a diversity of artistic styles. It provides a baseline against which the others may be compared. I would not be surprised to find out that the matches between each artist and their particular story play into Morrison's commentary.

Speaking of commentary, subtext, and all things between, Multiversity #1 is loaded with them. There are already articles being posted to help parse out the many allusions and references to be found in this issue. An understanding of comics history and canon will be useful in enjoying the story, even if it is not necessary. Some references are more obvious than others. Analogs of heroes from Marvel Comics appear and are just different enough that there will be no concerns about a lawsuit. Some components are derived from earlier Morrison comics though and may only be noticed by fans.

There is a lot of information to parse out in the first issue, but no real thesis yet. Morrison's earlier long-form works tended to morph and evolve as they continued. The Invisibles altered its central conceit multiple times. In this issue Morrison and Reis appear to be addressing the very medium of comics. A disembodied voice, implied to be Morrison's, appears to warn readers to stop reading or to keep going. In doing so it draws attention to the way in which we read comics, how the creators attempt to control our gaze, but can do nothing to stop us from flipping to the end of the story. When Captain Carrot points at the reader and asks, "Who else wants to argue with cartoon physics?" he draws attention to the craziness that surrounds some fan debates. It appears Multiversity could become a criticism of the comics medium, a celebration of it, or a bit of both. That probably will not be clear until the last issue hits the stands, if then.

With that in mind, perhaps the best way to read Multiversity #1 is as an adventure. In spite of the author's commentary, various allusions, and plenty of big idea, this comic is, at its heart, a superhero adventure. It's a story about good and evil. There is an unimaginable threat and great heroes must work together to defeat it. It's a story that has been told many times before, one that most comic publishers are constantly trying to tell in a new way. Whatever the ultimate success or failure of Multiversity may be, it has certainly succeeded in being something unique. That's more than enough for me.