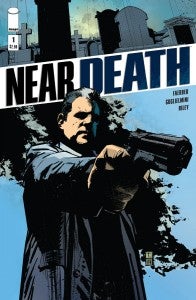 Image Comics has announced a new ongoing crime comic book by writer Jay Faerber and artist Simone Guglielmini. The creator owned series is called Near Death and poses the question, “Can a near death experience change a brutal killer into a better man?”

Jay Faerber is best known for his work on superhero titles like Noble Causes and Dynamo 5, but Near Death is a crime series fueled by regret. In Near Death, professional killer Markham gets a glimpse of his own disturbing life after death while clinically dead for two minutes. Markham decides he has to do whatever is necessary to prevent returning to the hell he sees, so he vows to save as many lives as possible. Markham’s goal is to somehow balance the scales of judgement.

“After spending most of my career working on superheroes, I'm really excited to be concentrating on my other favorite genre -- crime fiction,” said Faerber. “Near Death features all the things I love about the genre: the grim hero with no first name and a tortured past, brutal action sequences, and characters with shifting morals and loyalties."

Gugielmini said, “I’m having a great time illustrating Jay’s story, because it’s just so engrossing. Sometimes I really get caught up in portraying the action and tension of these pages. This stuff is intense!”

Near Death #1 is scheduled to arrive in comic book stores on September 21, 2011.

The Last of Us PS5 Remake Reportedly In Development

Will WWE NXT Have a Two-Night TakeOver Again?