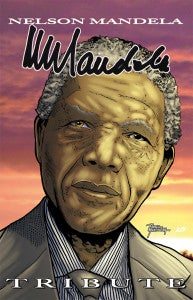 To the surprise of no one, Nelson Mandela's life is celebrated in a new bio-comic from Bluwater Productions, released earlier this week.

The 32-page comic book chronicles the life of the celebrated South African revolutionary and politician in pictures.  The comic book is  written by Clay & Susan Griffith, illustrated by famed artist Pablo Martinena.

“Not only is this a great way to understand the importance of his contribution to the world, but a great tool for kids to read about him in a different medium,” added Davis. ”Our biography comic books are now taught in schools and libraries for students and reluctant readers”.