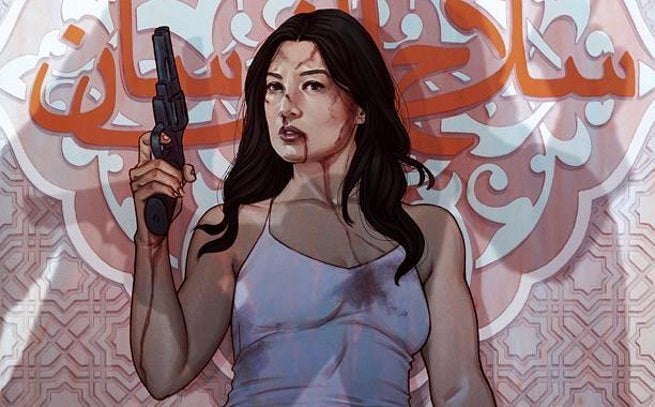 Marvel Studios has released the next installment of the “Art of Evolution” series of teaser poster for Season 2 episodes of Marvels’ Agents of S.H.I.E.L.D. This time Agent May (Ming-Na Wen) takes center stage for the episode titled “Melinda.”

Artist Jenny Frison created the poster, which teases the episode in which we’ll finally learn what happened in Bahrain to earn the nickname “The Cavalry,” which is scrawled in Arabic on the wall behind her in the poster.

“The first time we met her in the pilot, she was doing her office job,” executive producer Jeff Bell says, speaking of May to EW. “You know, sitting there completely shut down, going through stacks of paperwork. And even to look at where she is now in our show versus a season and a half ago, to see what turned her into that person… it’s always fun when you can find a compelling backstory that feels like it’s still driving the present story. Also, in episode 15, Skye disappeared with Gordon. Where did they go, and what’s that about? We have trouble fitting all this into our timeslot, but there’s a lot of cool stuff on Skye’s end as well.”

In “Melinda,” the story of Melinda May’s transformation into “The Cavalry” is revealed as she finds herself at a crossroads in the war between Coulson and Gonzales. As Skye learns more about her true heritage from Lincoln, the truth about the Inhumans will send her in a new direction.