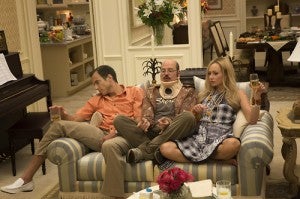 Netflix today released a new, official still from the forthcoming fourth season of the cult favorite sitcom Arrested Development, which is set for release on the streaming video service on May 4.

And while the images that had been released so far were fairly conventional (just a few images of actors and props that didn't tell us much about the story), this newest features three characters on a couch together--two of them (GOB and Lindsay) looking sullen and drinking, while the third (Tobias) wears a neck brace and meditates.

That's not all that unusual a sequence to see in a show like Arrested Development, but out of context...strange.