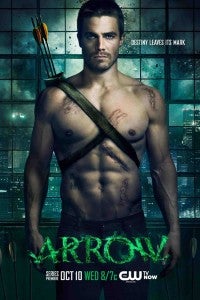 Any chance Arrow is going to be going for the female demographic? Looks like it, based on this new six pack-infused promotional poster for Arrow, featuring Stephen Amell and released by The CW earlier today.

The series will hit the airwaves on October 10; it stars Amell as Oliver Queen and will see Green Arrow facing off against Deathstroke, China White, Deadshot and others, as well as a number of other DC Universe guest stars and at least one mystery character played by John Barrowman.