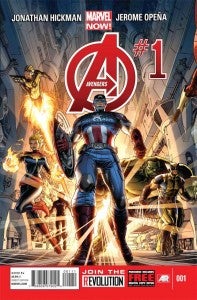 A new trailer for Jonathan Hickman and Jerome Opena's Avengers #1, out tomorrow in comic book stores everywhere, has been released by Marvel Comics and can be seen below.

With a trailer that seems to hint at much of what's to come, the general tone and tenor of the series, Ultron War and more, Avengers #1 is widely expected to be the biggest critical hit of Marvel NOW!, and probably the best-performing title overall.

Uncanny Avengers #1 may have been the launch title, after all, but it's pretty bogged down in continuity, features a number of second-string characters and is already behind its publishing schedule.

Hickman and Opena's book, meanwhile, is called "Avengers," which is pretty self-explanatory really and features not only the characters from the year's top-grossing movie but a number of other famed Marvel characters as well, in what promises to be one of the largest revolving casts that the title has ever had.

You can check out Marvel's official description below the trailer. The issue hits the stands in the morning.

Marvel is pleased to present your first look at Avengers #1, kicking off the all-new ongoing series from the blockbuster creative team of writer Jonathan Hickman, artist Jerome Opena and colorist Dean White! The greatest heroes in comics together on one unbeatable team! Now shipping twice a month, the Avengers “go large,” expanding their roster and their sphere of influence to a global and even interplanetary level. When Captain America puts out his call - who will answer? Big threats, big ideas, big idealism - these are the Avengers NOW!

An all-new direction! All-new threats! This is Avengers NOW!