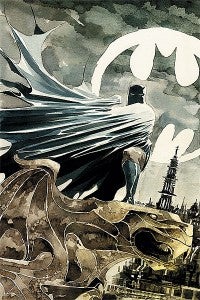 One of the newest ongoing series that spun out of the events of Battle for the Cowl, Batman: Streets of Gotham, drops onto comic book store shelves today. It's a new day in Gotham City, with a new Batman and, perhaps surprisingly, a new Robin patrolling the rooftops. The team of Paul Dini and Dustin Nguyen launches with a recurring backup feature focusing on Manhunter, one of the more mysterious figures of the DC Universe. A new adversary for this Batman emerges in this series, and many questions are raised by the police regarding their relationship with the new man behind the cowl. Writer Marc Andreyko, known for his work with the character Manhunter, will write the backup feature, with noted Buffy the Vampire Slayer illustrator Georges Jeanty providing the artwork. Another feature to not with this series will be its cover price of $3.99, an increase supposedly mirrored by added pages to this series, 40 instead of the standard 32. The creative power behind this series promises to make it one of the hot new titles of the year for DC!