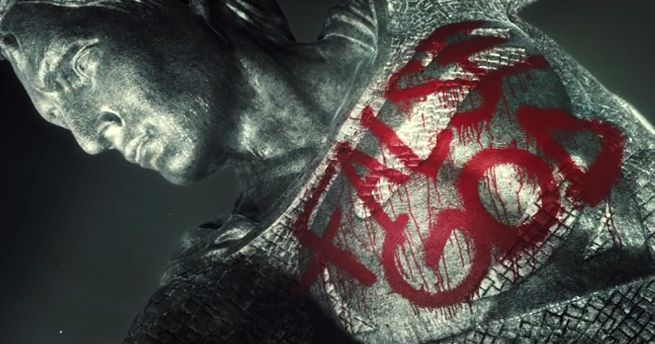 From the Las Vegas Licensing Expo 2015, Warner Bros. has released a new official synopsis for Batman V. Superman: Dawn of Justice. The synopsis confirms many of the plot points that fans have long suspected, based on filming rumors and scenes shown in the first trailer. Here is the new official Warner Bros. synopsis.

Fearing the actions of a god-like Super Hero left unchecked, Gotham City’s own formidable, forceful vigilante takes on Metropolis’s most revered, modern-day savior, while the world wrestles with what sort of hero it really needs. And with Batman and Superman at war with one another, a new threat quickly arises, putting mankind in greater danger than it’s ever known before.

Of course, the first part of the synopsis describing Superman as a god-like Super Hero ties into the image from the trailer of the fallen Superman statue with “false god” spray painted on it in red. The second part about a new threat quickly arising that puts mankind in great danger certainly sounds like it could match up with the much-rumored Doomsday.

Riverdale Recap: Everything You Missed in "Back to School"