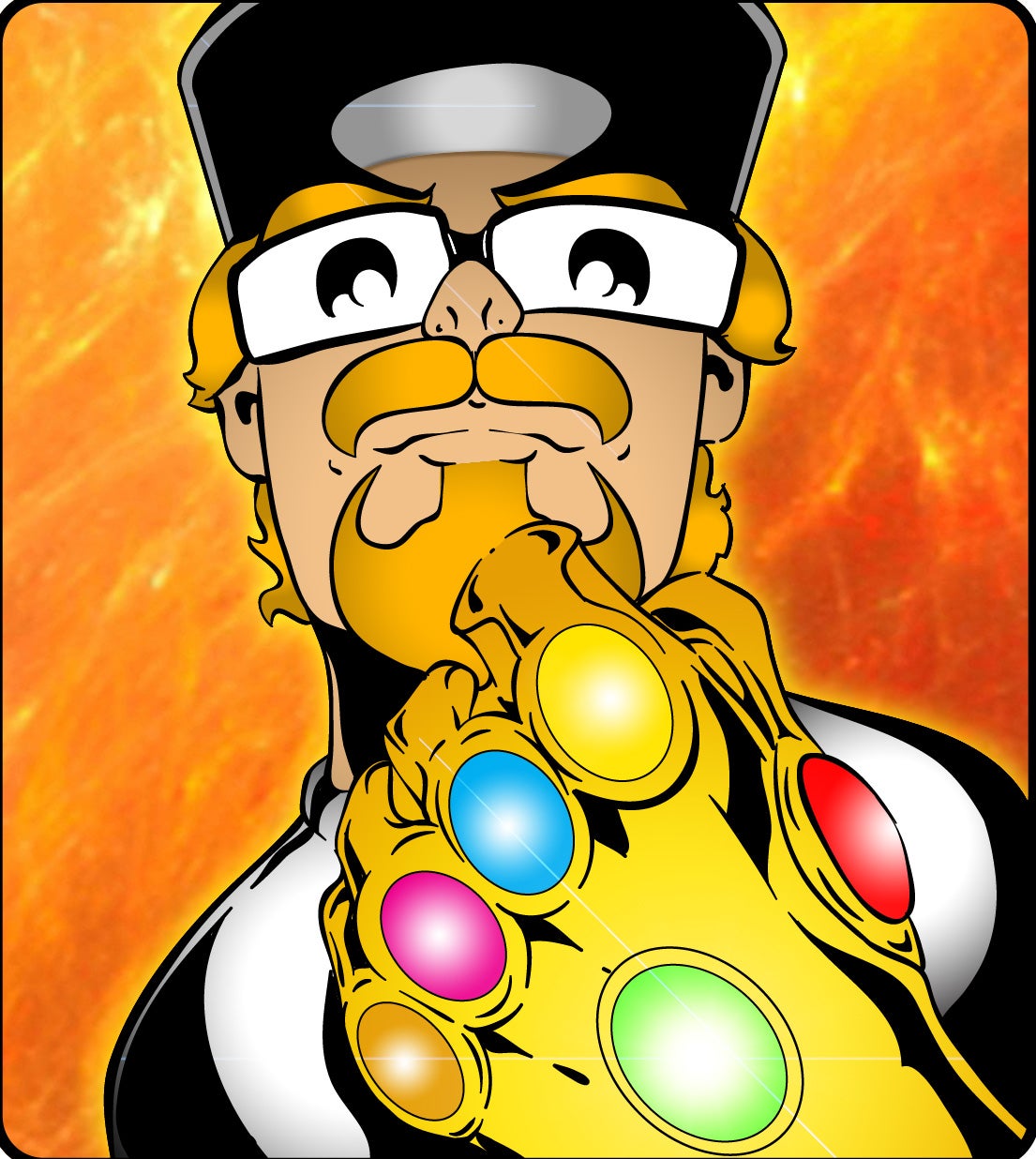 With just four days left, things look kind of bleak for Eric Ratcliffe's New Comic Day Kickstarter -- but the longtime podcaster and cartoonist is keeping his head up, noting that the number of supporters he would need to pass his goal isn't that much more than the number of books he's likely to sell at a big convention.

The series -- you can see it here, and the Kickstarter page here -- sprung out of Ratcliffe's work at Comic Related and on his Why I Love Comics podcast. The surreal comic adventure (in both senses of the word "comic") has been running for over five years now and, after a pair of trade paperbacks collecting a year or two at a time, it seemed as good a time as any to make a run at a hardcover, complete with an introduction by Tim Seeley.

Ratcliffe joined us to talk about the book, the Kickstarter and the process of trying to monetize an award-winning -- but still fairly small -- webcomic. You can see the video for the Kickstarter campaign below, followed by our conversation.

Okay, first of all, why not give the elevator pitch for anyone who's reading this and doesn't know the strip?

New Comic Day is a weekly webcomic that we call "Clerks meeting Looney Tunes" as some weeks we'll be arguing at the comic shop to waking up one morning to discover that Thanos has decided to crash on my couch and won't leave...for over 2 years now. 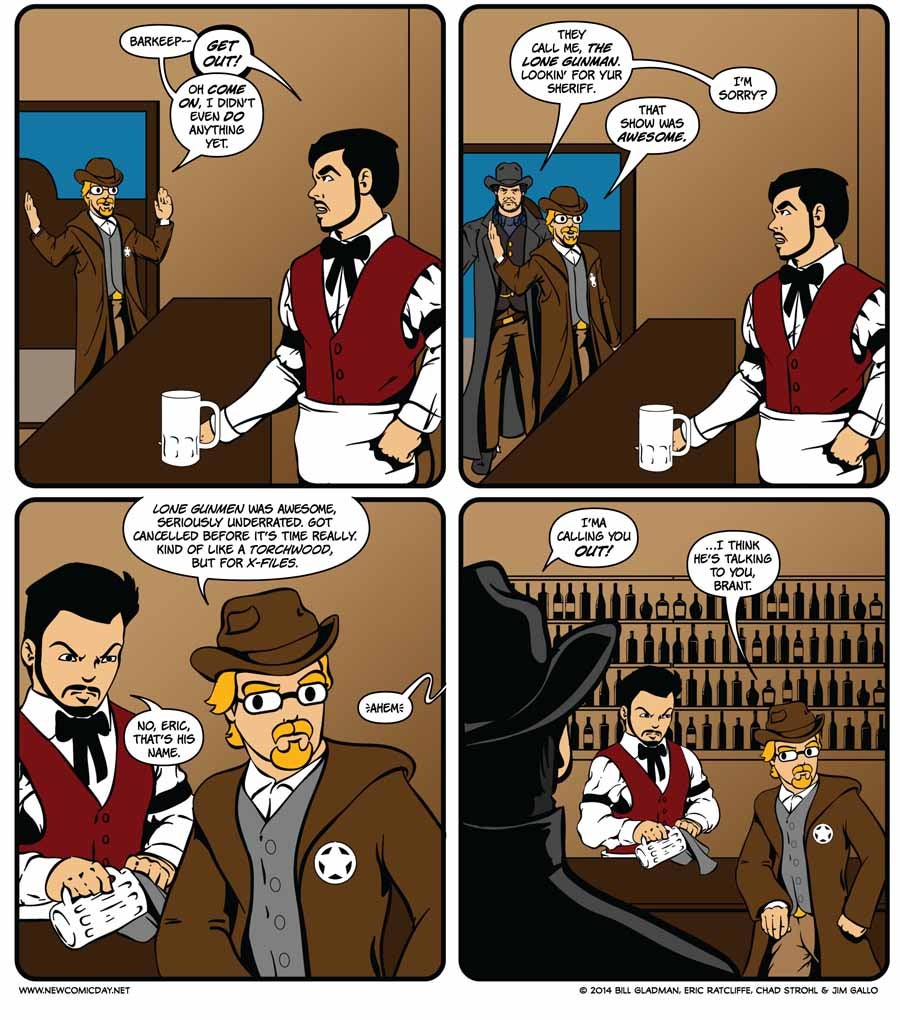 Obviously you've done print editions before. Is that mostly convention sales or do you sell them online, too?

There is a way to buy them online or at least their used to be. For the most part I just have convention sales and we're looking into eventually making the collections digital as well.

Will the full hardcover go digital or is this a Kickstarter/convention only item?

Nope, there's a digital tier that people can get a digital version of the whole thing and then they'll get a physical copy of the volume 1 comic and at least 1 print of their choice of any New Comic Day strip.

Is it tough marketing stuff like this -- especially online, or on Kickstarter, where you're not talking to people -- since the strip is available free online?

Absolutely, the webcomic market is extremely tough to talk to people at conventions about. A majority of people will take a postcard or a business card to check out the site. (Which is cool, I'm not complaining about that at all) but it's tough for any independent comic creator to try and get a sale I think. Especially when as you said, the strip is available online for free. I'd never add a pay wall though, we have been considering jumping on the patreon bandwagon for a while though.
Do you ever worry about having somebody go after you when you're using trademarked images or characters, or do you figure it's all pretty safely under fair use?

A majority of the time, the way we're using licensed properties and characters falls directly under fair use. (Especially when you consider other huge name webcomics do much worse with those name characters and never get anything from any of the companies) I do worry about it sometimes though, it would be easy to modify New Comic Day without the guest appearances but I think it would lose some of the fun if that ever happened. 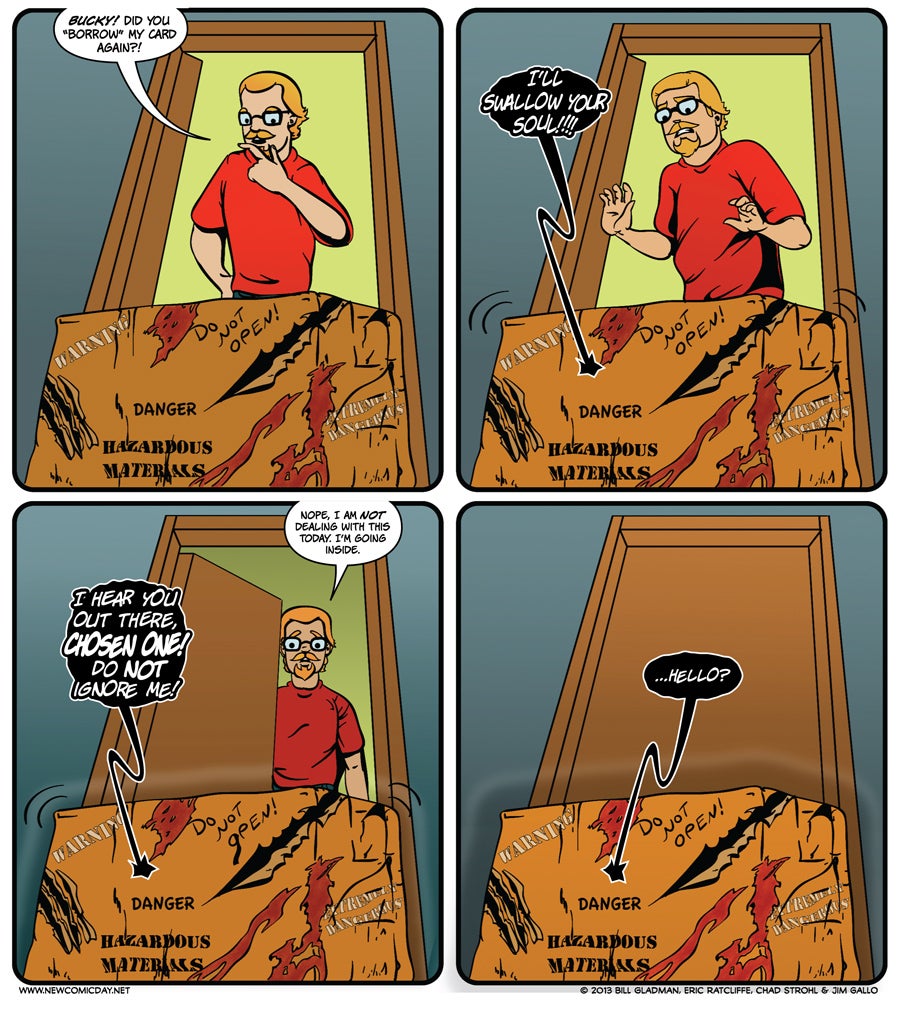 Obviously you've had a few creative shake-ups over the years, but the team remains fairly intact. Is it tough keeping a team together on something like this? Obviously many successful webcomics are basically one person jobs.

Brant Fowler (Letterer extraordinaire) and I are the only members of the team who have stuck around since almost the beginning. Brant came on pretty early from what I remember, pretty sure it was about halfway through year 1.

Chad Strohl the original New Comic Day artist left at the end of year 3, as did our original colorist Lisa Moore. Bill Gladman left at the end of year 2, which had me completely shake things up and have to "re-pilot" so to speak in Community terms. Alyssa Justice left in year 5, our other main colorist. Jim Gallo the second NCD artist left after year 4 and really helped make the strip what it is today and George Amaru the third NCD artist is returning in November where he and current artist Justin Johnson will be sharing art duties, both have 2 a month if everything goes according to plan.

It's definitely tough keeping a team together consistently for a long period of team but that original NCD team stayed together for 3 years and did some very awesome work.

The strip has obviously gotten a lot more "widescreen" as time goes on, and also a bit more absurd. I tend to liken it to something like Scrubs, that took some time to find just how far it could go. Do you think that's fair?

I'd go more Community than Scrubs, which your readers won't find as funny as the two of us. I love both shows but I find the absurdity of New Comic Day comes from the human element the most. The fact that anyone in their right mind would slam the door after discovering the necronomicon laying on their doorstep or making jokes about rolling for initiative while stuck in a crazy fantasy world.

I find it easier to write something happening organically than having a dream sequence or just one of those Family Guy "remember when this happened" bits. 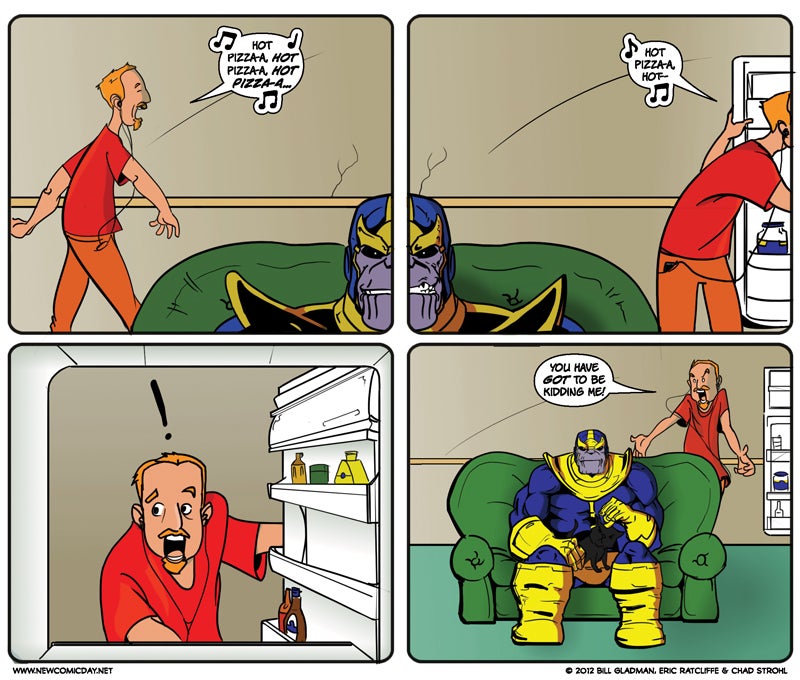 Has Thanos overtaken the Batmobile as your favorite long-running bit in the strip?

I think my actual personal favorite recurring joke has been finding new ways for Brant and the Wookiee to interact. That and raising the bar every Christmas to see just how crazy things can get.

What's the hardest thing about having Thanos crash on your couch?

What isn't? Death randomly showing up on your doorstep, having to buy a new keyboard, super villains showing up constantly to bug you. He's the worst.

Anything else you want to say before we wrap?

This Kickstarter has been a learning experience for me, I got advice from several of my favorite creators. Bryan Q Miller has been just so great helping me.

All we need to get this project funded is 148 backers at the 35 dollars level and we're funded. We have some great tiers above that but that's seriously all we need.

New Comic Day is my love letter to comics and pop culture. It's everything I love and it means the world to me when people say they dig it. Tim Seeley is doing a forward for us which is awesome because I've known Tim since about 2007-2008 meeting him in person for the first time.

I'm just really nervous about reaching our goal, I think it's possible with the time left. (The project ends at 1:10 pm eastern time on Thursday) but we'll see.