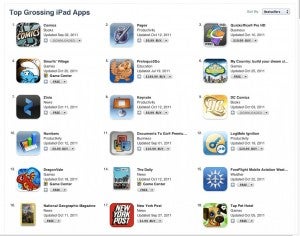 Comixology today announced that for the past six consecutive Wednesdays, the Comixology app has been the top-grossing  iPad app in Apple's App Store, beating out even Apple's own Pages eBook app.

"Long known as 'new comic book day' to print comic fans across the nation, Wednesday has now become an online comic book event thanks to more and more publishers going digital same day as print with new releases available on the Comics by comiXology iPad app," Comixology said in a statement.

Comixology attributed the success in large part to more publishers moving to day-and-date release of digital comics--a charge led by DC's recent linewide relaunch of their superhero comics. The first Wednesday in September, when DC's "New 52" initiative launched, both the Comixology and DC Comics (by Comixology) apps appeared on Apple's top ten grossing apps for the week.

"Comic books for the last thirty some odd years have been a destination item, sought out by a hard-core fan following and serviced by a dedicated group of independent retail brick and mortar stores. And while this network of stores rescued the comic book industry from near oblivion as newsstands disappeared in the 1970s, the unfortunate byproduct was that if you didn’t live near a comic shop or actually go to a comic shop, you would most likely be denied the experience and enjoyment of comic books," explained Comixology in their press release. While there's obviously fear on the part of the direct market that the success of Comixology will spell doom for them, Comixology simply says they're trying to help the industry at large.

“Our main goal since day one was to expand the audience for comic books. The medium has long been the inspiration for movies and imagery from comic books can be seen on everything from t-shirts to toothbrushes — but most people have not experienced the actual source material,” said comiXology co-founder and CTO John Roberts. “ComiXology was created to correct that wrong. David and I saw the opportunity to use digital distribution as a way to “unleash” this great medium on a largely unsuspecting public — and being ranked #1 for the last six weeks shows that we have met that goal.”

The press release also points out that while Comixology saw record sales throughout September, the print comics market did better than it has in years as well.

What all of this means for DC's analogy that digital comics amount to dental floss when compared to the sheet of paper that is traditional brick-and-mortar comics sales remains to be seen, and no hard numbers have been released yet by any mainstream publisher or Comixology to indicate how digital sales compare to the numbers at comic shops--but the App Store is a pretty large marketplace and performing well in that environment suggests that Wednesday is becoming known as "new comic day" for a widening audience.