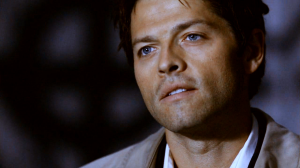 Whatever Misha Collins has to announce tomorrow, he'll have a lot more eyes on it than he previously might have.

That's because the fan-favorite Supernatural actor tweeted earlier this evening that "I'll have a very exciting announcement tomorrow. Hint: it has something to do with the UK and phone booths."

That's right, folks--the actor is none-too-subtly hinting that he will be the first American ever to play the role of The Doctor when tomorrow the world learns who will succeed Matt Smith as the star of Doctor Who when the character regenerates during this year's Christmas special.

Don't take it too seriously, though; it's hard to believe that someone actually cast in the high-profile role would blow the reveal with less than a day to go, especially when they had managed against all odds to stay off the gossip radar up until now.

So what's he really planning to announce--if anything? Search us...but almost every other tweet in his feed is about the Greatest International Scavenger Hunt the World has Ever Seen, a nonprofit activity he endorses that's part game, part community service. It doesn't seem entirely implausible that the whole thing is either a prank to drive attention to his Twitter account and thus to GISHWHES, or at a minimum a well-timed announcement about something relating to the event that has a Doctor Who theme to it.

"GISHWHES is a 3-time Guinness World Record breaking scavenger hunt hosted by actor Misha Collins," explains the event's website. "It is comprised of a global community of thousands of individuals (94 countries and growing!) that "gather" for a week online once a year, form international teams, and then go out into the real world and create "art" the likes of which the world has never seen. Last year we broke the Guinness World Record for the Largest Scavenger Hunt with 14,580 participants!...On the social improvement front, we're proud to announce last year's teams also broke the Guinness World Record for the most charitable pledges of Acts of Kindness (93,376!) in partnership with our non-profit Random Acts (www.therandomact.org), submitted thousands of images and videos of participants hugging war veterans and committing acts of kindness, delivered thousands of coats to homeless people and helped victims of Hurricane Sandy."