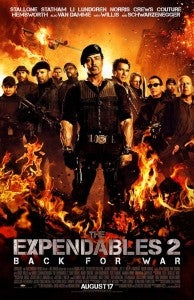 A new poster for Expendables 2, the multi-headliner action thriller starring just about every '80s action star ever to grace a movie screen, hit the Internet yesterday. Take a peek at right.

The film, which picks up where the first star-studded film left off, stars all the original principals plus new additions like Jean-Paul Van Damme and vastly expanded roles for Arnold Schwarzenegger and Bruce Willis.

The film hits movie theaters on August 17; here's what the studio has to say about it:

Mr. Church (Willis) enlists the Expendables to take on a seemingly simple job. The task looks like an easy paycheck for Barney (Stallone) and his band of old-school mercenaries. But when things go wrong and one of their own is viciously killed, the Expendables are compelled to seek revenge in hostile territory where the odds are stacked against them. Hell-bent on payback, the crew cuts a swath of destruction through opposing forces, wreaking havoc and shutting down an unexpected threat in the nick of time — six pounds of weapons-grade plutonium; enough to change the balance of power in the world. But that’s nothing compared to the justice they serve against the villainous adversary (Van Damme) who savagely murdered their brother. That is done the Expendables way….