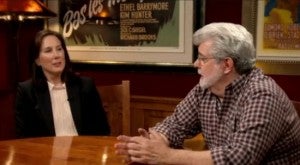 Lucasfilm has released the fourth in a series of five videos about The Future of Star Wars. The videos feature George Lucas and Kathleen Kennedy chatting about the Star Wars franchise. For those hoping that they might finally announce the director of Star Wars Episode 7, no such luck.

The Future of Star Wars videos appear to have all been recorded at one time, considering that George Lucas and Kathleen Kennedy are wearing the same clothing in each one that gets released. With the videos having been recorded in the past, it’s unlikely they will reveal any breaking news if decisions are still being made in regards to who lands the director role.

In the latest video, Georg Lucas and Kathleen Kennedy reflect on the Star Wars phenomenon. Kennedy says, “I think that it’s become a part of popular culture. It’s become a part of the vernacular. It’s got ideas in it that I think are very bonding culturally because they are shared by a generation.”