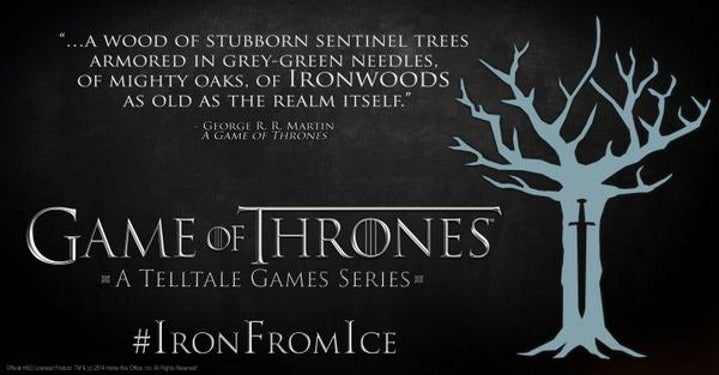 Telltale Games has released a new teaser for their upcoming video game based on HBO’s Game of Thrones.

Like the first teaser, this one features a quoted passage from the book series, seen below:

The passage comes from a scene in A Game of Thrones where Catelyn Stark is describing the Godswood. The quote emphasizes the word Ironwood, which is a kind of tree in Westeros that grows in the far North and Beyond-the-Wall.

The previous teaser emphasized the word “Forrester,” which is the name of a small clan sworn to Deepwood Motte that is known for their tracking skills. Both tweets end with the hashtag “Iron from Ice,” which may be a subtitle for the game, or possibly the name of the first episode.

It’s hard to put such vague clues together. My first thought is that maybe you’ll be playing a Forrester tracker sent beyond-the-wall, or maybe just into a thick Northern forest, to track something, or someone, down.

We’re still awaiting a release date for the game, so there’s no telling how long we’ll have to wait to get some answers. Hopefully we’ll hear more soon.

Warner Bros. Tried to Sell James Gunn on Superman Before The Suicide Squad