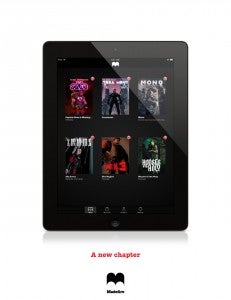 Dave Gibbons, Mike Carey and Liam Sharp are among the creators whose work is appearing on the Madefire Comics app starting today.  Their stories are the first in a launch an interactive motion books app that Madefire says will allow any creator who wants to make a motion comic to do so using software available at the company's website.

“Madefire is igniting a new era by creating a modern, dynamic reading experience and bringing that to the millions of iPad users around the world,” said Dave Gibbons, co-creator of Watchmen and advisory board member at Madefire in a press release. “It is exciting to be able to bring this robust storytelling into the 21st century while also democratizing the ability to publish comic books.”

Liam Sharp, the company's Chief Creative Officer, elaborates: “Madefire allows creators to bring the excitement and intensity of comics  and graphic novels to iPad in a truly interactive format. We have seen these great innovations  in other forms of entertainment such as gaming, movies and television, but reading has largely transferred words to the digital page without transforming the experience.”

Exclusive to the iPad, the app has seven initial titles in its launch, which are optimized for the iOS features. Creators like Gary Erskine, Doug Braithwaite and Bill Sienkiewicz are onboard for the longer run.

Madefire is the first notable company to advance the self-publishing of digital comics into the motion arena; while some digital comics apps and distributors such as GraphicLy allow users to generate their own content for free or cheap using their specialized software, none of them have yet moved into the more difficult-to-maintain arena of motion. It's also a controversial area for webcomics creators in general, some of whom feel that the point of being a comic instead of animation is lost somewhat when you start to introduce motion and special effects into the art.