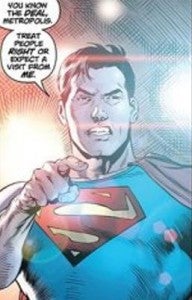 Remember when Superman stood for truth, justice, and the American Way. He was that straight-laced superhero who would never go outside the law. In the new DC Universe, it's not only Superman's costume that has changed. As evidenced by a preview of Action Comics #1 on Yahoo.com, the world is getting a younger, more cynical Superman. The Superman in the preview pages for Action Comics comes across as a cross between Batman and Judge Dredd. This young Superman is not content to just go after the obvious criminals, like the purse snatchers and the cat burglars. Instead, he's shown going after the white collar criminals, who engage in creating unsafe work conditions or bribe public officials. In a scene reminiscent of something you would expect to see in a Batman comic book, the new Superman dangles a white collar criminal from the roof of a high building. He lets the criminal plummet face first toward the ground below, before stopping his fall at the last second before impact. This method of terrorizing a criminal into a confession is exactly like something one would expect from Batman, but never from Superman. After his Batman moment, Superman then channels Judge Dredd. He issues a stern proclamation to the citizens of Metropolis, saying "You know the deal, Metropolis. Treat people right or expect a visit from me." Superman isn't just an enforcer of the law of the land, but he basically seems to be anointing himself as the law. When police officers move in to arrest him, Superman scoffs at them, saying "How about you and your boys deal with the real criminal scum in this city, and then you won't need me to do it for you?" Superman then runs off, challenging the police to catch him if they can. When Action Comics #1 hits comic book stores this week, it will be interesting to see how the rest of the story plays out. With a lot of people still out of work and the latest economic news looking bleak, the story could very well strike a nerve for a lot of people. Some fans could embrace this new Superman, as a hero for our times. Other fans will likely miss the familiar, by-the-books Superman.

New Superman Works Outside The Law