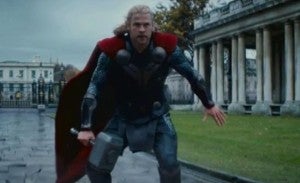 However, Conan added, "But I've got to tell you folks, I've got the same complaint that I had with the first Thor film. I think...argue with me if you want...I think they cast the wrong guy to play Thor."

It was an unusual comment form Conan, considering Chris Hemsworth looks more like the comic book Thor than any other actor we can think of. However, it appears that Conan's problem might be with Hemsworth's voice. Check out the Thor: The Dark World trailer below to see what Conan O'Brien is complaining about.