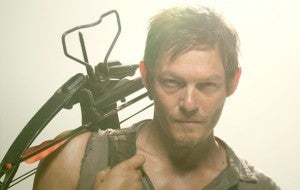 debuted a trailer for Before the Farm, a new, first-person shooter video game set in the world of the popular AMC's mega-hit zombie drama The Walking Dead.

Featuring Merle and Daryl Dixon, with Daryl being the playable character, it tells the story of how the pair of good ol' boys made their way through a zombie-ravaged world before they reached Atlanta and met up with Rick Grimes' crew of survivors.

The duo, who were created for the TV series and never appeared in the comics that serve for the show's source material, have become fan-favorites, with Daryl taking on an increasingly-important role on The Walking Dead last season and Merle returning in season three for the first time since his character disappeared from a rooftop in the show's first season. While Daryl has been the show's strong, silent type, his brother is, to put it delicately, a ranting, racist maniac who seemed to bring chaos wherever he went. That should make for ideal gameplay, since the players can put themselves in Daryl's shoes while Merle's, ahem, enthusiasm, creates additional problems beyond just the zombies.

ActiVision will release the game in 2013 for Playstation 3, X-Box 360 and PC. It will have no connection to the existing games by Telltale, which take place a kind of modified version of the comic book's continuity and in which players use a new character created for the games as opposed to an existing, established one. A Walking Dead "social game," to be played online and through Facebook, has long been teased and will have a strong presence at the AMC booth at Comic-Con next week.

Marvel Fans Show Off Their Versions of Thor’s Stormbreaker