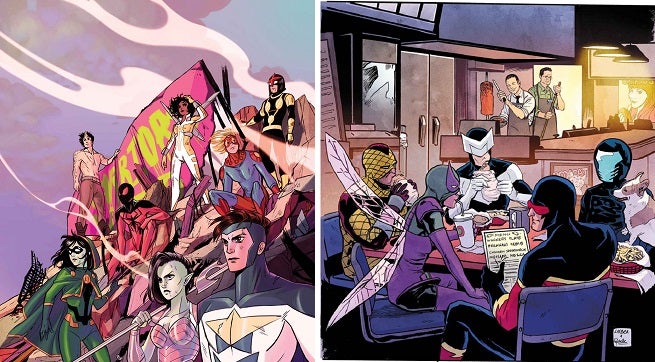 Today's release of the Marvel Comics solicitations for November comics revealed that both The Superior Foes of Spider-Man and New Warriors will end their runs in that month.

In the case of both, they avoid the "final issue" solicitation, trading it in for "Series finale," presumably to give it a bit more of a feel of closure and design.

The covers (above) don't tell us much -- New Warriors is just the team standing there looking very serious, while the Superior Foes cover is a bit more inspired and visually interesting, but still just an homage to the post-credits tag on Marvel's The Avengers.

Here's what Nick Spencer had to say about the end of The Superior Foes of Spider-Man:

No one be sad about SUPFOES, though. We got MORE than the time initially given to tell our story.

We're ending, not being cut short or left for dead... these days, that's a win.

No relaunch in the wings, 17 is the end of the story, end of the run, END OF AN ERA.

Check out the solicitation text below:

NEW WARRIORS #12
CHRISTOPHER YOST (W)
MARCUS TO (A)
Cover by STACEY LEE
• SERIES FINALE! It’s been a hard road for the New Warriors, and after fighting the Evolutionaries, and saving the planet once or twice, things reach their shocking conclusion!
• After months of battling, the New Warriors finally find some measure of peace, but will it last?
32 PGS./Rated T+ …$3.99

New Warriors, Superior Foes of Spider-Man to End in November