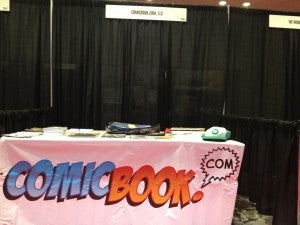 ComicBook.com is exhibiting this weekend at the New York Comic Con, and we'd love for you to drop by. We'll be updating this throughout the weekend to reflect the different events, signings and interviews that we're doing at the booth, but Thursday tends to be a slower day for the big news and so today we're doing a giveaway! Fans who are at the show can stop by our table--#2249 in the small press area, not far from Nickelodeon's big Teenage Mutant Ninja Turtles zone--and sign up for our e-mail list. On our table, we've got dozens of giveaways from San Diego Comic-Con--everything from exclusives we bought at the show to giveaway books, posters, buttons and bags. While supplies last, stop by, sign up...and just take something off the table. We'll be updating with NYCC swag throughout the weekend, as well, to keep stuff present and accounted for as we no doubt start to run sparse on the good stuff. We've also got Greg Palast and Ted Rall--authors of Billionaires & Ballot Bandits, and the Tales From the Crypt of Democracy graphic novel contained therein, set to come and sign on Saturday, in what will be their only New York Comic Con appearance and Palast's first-ever comic convention. Come, talk about the election and give the man a welcome...and maybe we can show you a preview of his next big comics project. Check back here for the exact time on their appearance, as well as more signings to be announced, as we've got a handful of creators stopping by throughout the weekend.