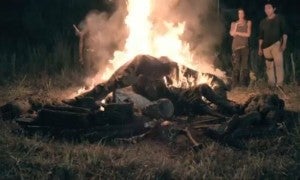 With the release of The Walking Dead #115 on Wednesday and the launch of Season Four of the AMC series on Sunday night, "This is the greatest week ever to be a Walking Dead fan," said executive producer David Alpert to kick off the series's panel at New York Comic Con.

"We're here because of you, the best fans in the world," executive producer Gale Anne Hurd told the audience. "So give yourself a big round of applause because you have made us the number one television show on TV."

Norman Reedus threw stuffed squirrels out into the audience on the way in, before Brown asked about new characters.

"You should be invested," said Gimple of the new characters.

"There are things this season that made me tear up when they came together," Steven Yeun said, adding that "I think the new character Negan is pretty cool, hopefully we'll be around that long. There's a big wish list."

"Squirrels have grown immune to Daryl Dixon," joked Gimple. "So watch out for that." 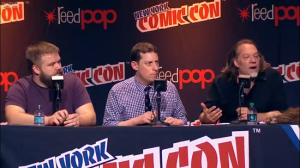 "That was very surprising, believe me," said Lincoln of cutting off Hershel's leg in season three. "I had to do ADR on that line. I don't watch the show, because I have to live it. But I watched that bit and that [noise] I made, it wasn't scripted and I was absolutely appalled by what I was doing. My wife called me up that night, and we had to chop his leg off twice."

Lincoln added, "I had to chop his leg off! What was I supposed to do? It was infected!"

"They told us to go home because we were wrapped," said Yeun. "And we said, 'Oh, hell no! We're watching this!"

"I like to express myself, I use my words," Gurira said. "There was a lot of intensity in what she was doing. It was easier to be more released, but the whole idea of emotional, I thought there was more emotion inside when I didn't talk. She was so on edge to do everything she could do."

"I think dad would want me to pick my boyfriend," said Cohan when asked whether she would choose Glenn or Hershel. "Steven, who would you pick, me or Herschel?" 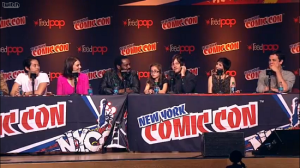 "I would make her pick Herschel and then float away on a piece of driftwood," joked Yeun.

"I actually wanted Chad Coleman to play Tyreese in a 'Walking Dead' show before there was a Walking Dead show," Kirkman told the audience. "The fact that it came together is amazing and I think you're going to love what's coming up."

"[Daryl has] grown up a lot since then and I think he's finding this sense of self-worth through these people," Reedus said. "He's growing up to be the man he wouldn't have been before. He's going into full-blown wolf mode."

Brown accused Reedus of starting the Internet trend of "shipping" Rick and Michonne. "He said that Andrew looked Danai up in a scene," said Brown.

"I'm going to defend!" said Gurira. "He was looking introspectively at the ground. But I do appreciate that people seem to want Michonne to get some."

"Sarah Wayne Callies will kick my ass if this goes down in season four," said Lincoln.

"It's really exciting, we get to see where all the characters are," added Nicotero. 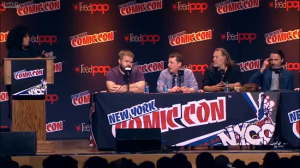 They then announced a few pieces of casting before opening the floor to fan questions. We'll be back with that later.

"Carol in season one...I think she displayed a lot of strength braining her dead husband's head," said Gimple in response to a question of the direction her character arc has taken. "in the beginning of season three, Rick says she's become a good shot. This season we see her teaching kids about knives. She had a daughter that died, and she's making sure that she's not a victim, but she's also making sure the kids aren't victims."

Lincoln added that Melissa McBride, who plays Carol, is one of the best actresses he's ever worked with and that "This season, you're going to see so much extraordinary work from her." He alter added that Chandler Riggs, who plays Carl, will also "kick ass this season," singling out episode 9. 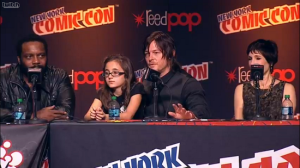 Gimple told the audience that he hates writing death scenes, and that he tries to give the actors as much notice and input as is plausible.

"When they go, it's heartbreaking, we all feel it," said Lincoln," but hopefully it makes the story stronger."

He also said that there's an episode coming up where after reading the script, he sat silent and needed to call someone for a human connection, becuase he was so shellshocked. 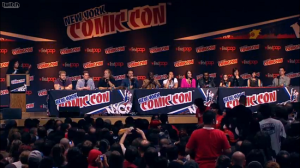 "We are going to get in so much trouble for this episode," said Lincoln. "It's going to be amazing."

"Sophia coming out of the barn was the amazing moment for me," said Nicotero. "The writers pitched the first eight episodes and I was literally sitting on the edge of the chair."

"It's different not being in the comics," Reedus said. "I've offered to wash Robert's car, I've offered to sleep with him, but anything to get on this book! It feels like this is our show. We're fortunate to have such awesome bosses on this show, it's such a collaborative job and it's so fun -- it feels like it's ours."

After a fan asked Reedus to call his fiancee, who is ill and couldn't attend, Gale Anne Hurd and Greg Nicotero shared bits of preview photos and footage.