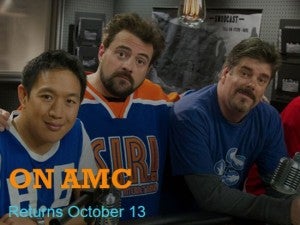 This afternoon at New York Comic Con, Kevin Smith and the cast of AMC's hit reality series Comic Book Men (Ming Chen, Bryan Johnson, Walter Flanagan and Michael Zapcic) joined a small group of reporters to discuss the series, the next season and the persistent accusations that it reduces comic book fans and retailers to stereotypes.

Smith, true to form for him, launched into the interview without a question having been asked, so when the transcript below begins, don't think you missed anything besides "What are we talking about?" "Your show."

Below is what Smith had to say about the show, which they thought was dead in the water after one episode, not only getting a third season but getting the plum post-Walking and Talking Dead timeslot on Sundays. They were out of there for a bit, but are back for season three...and without prompting, Smith explained how:

"Season three--a miracle," Smith joked. "Never thought we'd get here particularly when the first episode launched. There was a healthy contingent on the Internet that went after the f---ing show. They said 'F--k you and your f---ing friends. Your'e propagating a stereotype about what a comic store is and what they all do. All these dudes live in their parents' basement,' all this bulls--t. All of these guys are married except one who, to be fair, did live in his parents' basement at the beginning of the show but other than that, we really didn't feel like the show celebrated stereotypes. If anything, it was just like guys sitting around picking on each other.

"So, first episode airs and the long, sharp knives come out, teeth come out, all that s--t, so much so that Bryan [Johnson] who has very thick skin--I, of course, have eggshell f---ing skin and everything bothers me--Bryan, who never gets bothered by anything, was hit really hard. He's like, 'What the f--k, man? I hate everything and I like this show.' I was like, 'Yeah, but you're on the show and it stars people you like.'

"So after the first episode, we felt we were dead in the water. We only had six, they were hour-longs in the first season. We figured that's it, man, once the show runs its course, they're never going to pick it up with people saying s--t like that. Becuase you get so focused on--you flip the microphone.

"When you deal with the Internet--and I live on the Internet, so much so that I'm the f---ing Lawnmower Man at this point--you have to remember to flip the microscope periodically and remember that you're looking at something magnified very big that is in all actuality is something not all that big.  At the end of the day, yes there were people bitching about the show but there were a lot of people drowned out who kind of liked the show and we got to hear them episode two and three because after the hate of the first episode, a lot of that seemed to go away. And not like people going 'I like it!' No. It's just that people were like, 'I tried it! F--k you!' and they left and everyone who was left in the room was like, 'Hey, we like this' and it settled into a nice groove.

"But then, in TV it doesn't matter how you feel or if you like the fact that your friends are on the show or something. So at the end of the day, we had some nice numbers. Granted, we're traveling in the wake of a juggernaut. We had The Walking Dead season one for us and then season two when we went back, they had the smart idea of putting Talking Dead after Walking Dead. Once the numbers came in, it didn't matter that people were like 'F--k you and your friends and your show,' because the network was like, 'This is exactly what we were hoping for. Thank you very much.' The show is not that expensive to produce--some people I've seen online go, 'How is this f---in show at season three?' The key is to keep it inexpensive. We don't go in there and go, 'This is what it's going to cost to do the show this year, it's a big, steep raise.' Not at all--this show benefits...it's an absolute  f---ing commercial for my store so we don't go in and rake them over the coals. We don't go in there and bend them over a table and say 'Give us some of that TV money.' I don't go in there and be like, 'Here, here's my check to you,' but we don't take them for a ride at all and because of that the ratings are strong enough with a budget that's small enough where we can get to a season three.

"So it feels good, man. The work, the show speaks for itself and eventually gets you there. Thank God we've got a network that actually likes us. They moved us, season two, to a Thursday night reality block that the ratings were not for us what they were behind The Walking Dead, obviously. So we were scared as f--k when they ran that last cycle on the Thursday nights that that was it--it's been a nice ride; at the end of the day we'll have had two seasons, but there's no way this goes any further. And God bless AMC; they were like, 'We're going to double-book the show. We'll throw it on another night and see if it gets a number there, too. And it did and suddenly the night that we weren't on, Thursday night, they re-run it again late on Sundays after Walking and Talking and it's pulling a better number than it was pulling on Tuesday. So they're like, 'We believe in the show. We moved it, we're experimenting, don't worry about it. You just keep making your show; don't think about ratings and stuff.' Because if we were to think about ratings, it would have looked like we wouldn't have come back. And then we got the call at the end of the season, 'We like this show, man. We think this is great. We're going to put it back where it belongs, after the Dead shows.'"