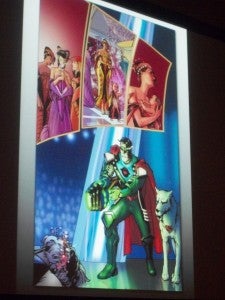 That is your first and last appearance of Krypto, said Superman group editor Matt Idelson at the "DC All Access: Superman" panel at last weekend's New York Comic Con. He was referring to a slide projected on the screen (shown at right), which appears to depict Jor-El (Superman's father) and Krypto (now apparently Jor-El's dog instead of Superman's) in battle. The page in question was drawn by Flashpoint's Andy Kubert and will appear in Action Comics #5 (written by Grant Morrison), an issue in which Superman will apparently revisit some of his Kryptonian roots. As an aside, it's probably worth noting that MTV's Splash Page reported yesterday that Jor-El, always depicted as a stoic man of science in previous big-screen adaptations, would be getting his hands bloody in he upcoming franchise reboot Man of Steel. Between that, and he absence of red trunks, are we seeing a bit more synchronicity between the print and film arms? There has been some speculation on message boards that the goat-like skeleton presented to Superman in the recent Action Comics #2 was, in fact, Krypto. Bleeding Cool referred to the image presented at the panel as depicting Krypto as hoofed and horned. There doesn't appear to be anything in the image here to support that, although certainly the angular ears and large feet could lead someone who already suspected the Action #2 animal was Krypto to believe they were validated. While Krypto's guard-dog-on-steroids look is certainly new territoriy, can anyone identify whether Jor-El has ever worn this before or whether this is yet another re-envisioning of Krypton? I've lost track...!