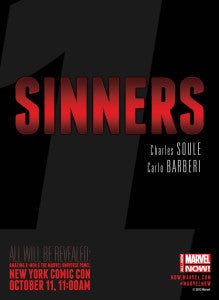 We're less than two weeks away from New York Comic Con, where apparently Charles Soule and Carlo Barberi will have a new title announced in the X-Men family.

The one-word teaser just released at right--"sinners"--is all we know about the title, which will be unveiled on October 11 at the Amazing X-Men panel.

Two other titles have already been teased for that panel--"Trial" with Brian Michael Bendis and Stuart Immonen, which is widely expected to revolve around the trial of young Jean Grey for her future self's crimes; and "Corporate" from Peter David and Carmine Di Gianomenico, which most are thinking will be an X-Factor rebrand of some kind.