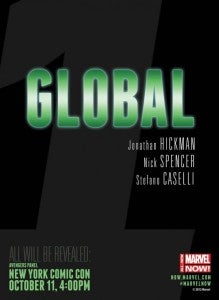 Could Avengers Assemble, the new-reader-friendly Avengers title by Kelly Sue DeConnick and a rotating roster of artists including Stefano Caselli, be changing into something different, more "global," when the already-announced creative change announcement comes soon for what the book will look like in 2014?

DeConnick has been rumored for some time to be on her way out of that title, after all, and she'll be sharing writing duties in December with Warren Ellis, back doing Marvel monthly for the first time in ages. Ellis is, as most readers will know, not as suited to the lighter tone that Bendis and DeConnick had cultivated in the first year and a half or so of Assemble.

So when Marvel said cryptically that the questions about the book's creative team would be answered soon, most assumed that DeConnick would be moving onto another title and Assemble would be brought more in line with the rest of the Avengers titles.

Now, we get Avengers writer Jonathan Hickman teased for a new title with writer Nick Spencer and Caselli, due to be announced next month at New York Comic Con. Could an All-New Marvel Now title be taking the Avengers...global?

And if so, will Assemble cease to exist, or will this be something different that just happens to include Caselli?