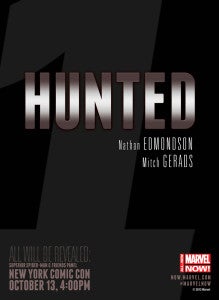 Nathan Edmonson and Phil Noto had a new Marvel series teased just yesterday--something about "atonement." But apparently Edmonson is a favorite at the publisher right now, because he's also doing a second new series, this one with artist Mitch Gerads, as Marvel teased a new title today with another one-word teaser. This one? "Hunted." This one's a Superior Spider-man and Friends announcement, apparently, and it could be any number of characters from taht universe. With everything in upheaval, who could end up hunted? Could be Doctor Octopus if, as has been hinted, he's finally separated from Peter. It could be the Venom symbiote, separated from Flash Thompson and officially rogue to the government. Or, hell, it could be Thompson himself, having ticked off any number of people as Agent Venom and now apparently defenseless without the suit. More to come on October 13 at New York Comic Con.