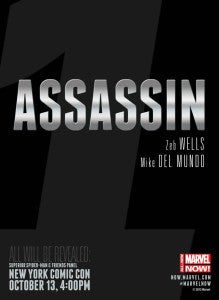 is such an iconic story in the publishing history of Marvel Comics that it's difficult to imagine the latest one-word teaser released by the publisher--"Assassin"--as anything but. Certainly the silver color and the fact that it's being announced at a Superior Spider-Man and Friends panel suggests the possibility of Silver Sable, but still: Assassin. It's not a better fit for anyone else in the Marvel Universe and it's got such history with Elektra that if this isn't an announcement of her getting her own title, it's likely an intentional ruse on Marvel's part to make us think that way. Zeb Wells and Mike Del Mundo are the creative team on the title, which will be announced on October 13 at New York Comic Con, so until then we can't be totally sure. Still...!