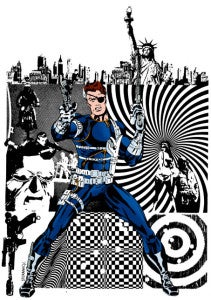 One of the pieces of news buried in the onslaught of Avengers announcements this afternoon at New York Comic Con is that Nick Fury (or, Nick Fury, Sr., or however he's referred to these days)--the old white guy with the graying temples and penchant for cigars--is going to be playing a major role in upcoming stories in the Marvel Universe. That's according to Marvel's Tom Brevoort, who said that at the Avengers panel today that the character will be important "in the next few months" of Avengers family books. That suggests, probably, that he'll have a role to play in the way Infinity shakes out. Could we see him move from S.H.I.E.L.D. to some other shadowy organization that deals with the fallout from the Infinity invasion and the surge in the Inhuman population that comes next? Really, it's just idle guessing, but that's fun sometimes. No other details were given, but since we've got a certain subset of fans always asking whatever happened to their Nick Fury, we figured it was worth mentioning. Fury, originally created as the head of a division of World War II soldiers, was reimagined in the '70s as a grizzled spy and the head of S.H.I.E.L.D. It was that role he filled for decades until, around the release of Marvel's The Avengers to theaters, it was revealed that he had secretly fathered a child who grew up to be an impressive S.H.I.E.L.D. agent in his own right. This son, conveniently enough, was black and liked long black coats--making the new "Nick Fury, Jr." a dead ringer for Samuel L. Jackson's cinematic Fury. Nobody wanted to get rid of Fury Classic, though, and so he's been bouncing around the Marvel Universe for a while.