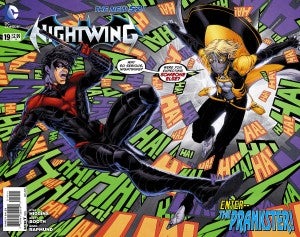 The Prankster was introduced to the new DC Universe in today's issue of Nightwing, and now that you all have had a little time to digest the issue, we figured it was worth asking: Who's behind that mask?

The version of the character we see in this issue has very little in common with the suited, mustachioed Superman villain of the past. In fact, we've got some thoughts on his costume and look below.

In any event, we're going to discount people like Nightwing's new roommate and random background bar patrons, because while they're theoretically possible, they seem pretty unlikely in the face of decent candidates right in front of us.

There are a number of options that stick out, so here are some thoughts:

The Mayor of Chicago

He's got a suit, a smirk...and no name. Could we be seeing a version of the original Prankster in the way the Mayor comports himself in public, and then another "face" that he only breaks on on special occasions like we saw in today's issue? We'll find out soon enough, if a future episode refers to him by Oswald Loomis's name.

And, really, what better disguire for your incredibly well-known face than a total change of race and hair? If I were an older black man trying to hide my identity as a master cyber terrorist, I'd probably try to be a blonde-haired white guy, too.

It certainly doesn't seem unlikely, given the fact that the mayor seems less averse to the Prankster's computer crimes than most mayors would be...but on the other hand, how would The Prankster have sent in the tip, if it were the Mayor (who didn't appear to be in the bar), how would he have known Nightwing's location to turn him in? (Answer: He's a hacker, and that dude in the background taking cell phone pics was probably something he could access.)

The stilted way of speaking certainly seems to point you that way, doesn't it? Both of the characters have a smooth way about them, a thin frame and choose to talk down to the people around them.

Spade is also wearing a hat for the entire time we see him, meaning that we don't have much to go on, in terms of whether he might be hiding an unruly mess of blonde hair under that skullcap.

That full-body costume and full-face mask could be hiding something more than it seems. The "armored" look could, in fact, be forcing Mali's breasts out of view (she's not as massively-endowed as many comic book women, so this is actually a plausible possibility).

She's also got the floppy blonde hair--long enough to be Prankster's, but not quite long enough to disqualify her. And what kind of prank would it be to lead everyone on for all that time that she's a man, only not to be? Hell, maybe the other voice in her head IS a man.

If it's her, though, she must have been faking her whole psychotic break in the bar, because it sure seems like the person in the Prankster costume has it together better than she did... 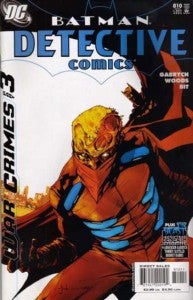 Here's one that would blow some minds and explode some comics message boards, no? Check out the design on the jacket, and the floppy hair. As soon as I saw that hair, I remembered the old Tom Grummett's Robin-era Cluemaster.

You'll have to Google the character to get a sense for the hair; the jacket seemed the key piece of evidence here, so I selected a graphic that went with it.

And why would that really throw things into chaos? Well, it was during the Tom Grummett era that the idea of Cluemaster's daughter became an important one. First a fairly annoying girl who had a crush on Robin and seemed to be basically created to stand between him and the "one, true love" of his early comics, Stephanie Brown eventually morphed into a hero in her own right, rebelling against her father's villainous ways. After her time as Spoiler...well, you know.

And she' been sorely missed by a small, but vocal, group of fans. Can you imagine what kind of mayhem would erupt in those quarters if it turned out her dad was being reintroduced into a bat-title...but rebranded as another character and presumably absent his daughter?

Nightwing #19: Who is the Prankster?